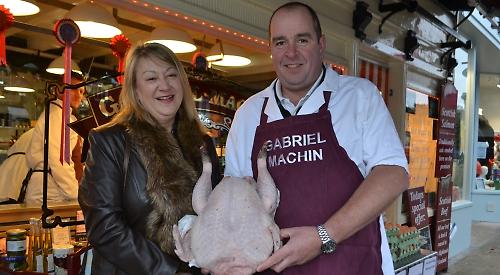 THE winner of this year’s Henley Standard Christmas turkey competition says she only entered on a whim.

Julie O’Connor, of Drays Lane, Rotherfield Peppard, was one of dozens of people to enter the competition to win the £75 bird from Gabriel Machin butchers in Market Place, Henley.

She answered correctly that Christmas turkey is traditionally served with “all the trimmings” and her name was drawn out of a hat.

Mrs O’Connor said: “I entered the competition really just on a whim so it was lovely to hear that I’d won — it was smashing. I buy the Standard each week and thought it would be a bit of fun to enter without thinking I’d win.

“I’ve bought a few things from the butchers before but never a big turkey so this is lovely.”

Mrs O’Connor will feast on the 10lb bird on Christmas Day with her partner Vince Jay, with whom she runs a tool hire business near Heathrow airport, his sister Denise Jay, mother-in-law Joan Jay, daughter Sophie O’Connor and her partner Ben Woodgate.

They will be at Mr Jay’s mother’s house in Eastcote, Middlesex. Mrs O’Connor said: “I imagine the turkey will be coming with us on the passenger seat — I’ll make sure I put a seatbelt around it!

“With the hours that we work we usually fall to a frozen bird so to have a fresh one from a local business will be very enjoyable. Last year we had roast beef so it’ll be a nice change and it’s traditional, isn’t it?”

The turkey was supplied by Starveall Farm in Aylesbury.

• Don’t miss your chance to win a Tesco Christmas hamper in next week’s Henley Standard.