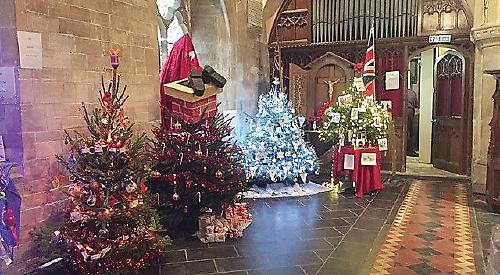 ABOUT 150 people attended the launch of the Watlington Christmas tree festival on Saturday.

The Rev Daniel Thompson, the rector of Watlington, blessed almost 40 trees which have been specially decorated and put on display at St Leonard’s Church.

Father Christmas then arrived on a tandem bike with churchwarden Jon Barton dressed as Rudolph and there was a countdown from 10 to zero before the tree lights were switched on.

Visitors sang carols including O, Come All Ye Faithful, Away in a Manger and Silent Night and then everyone enjoyed mulled wine and mince pies.

The festival, now its ninth year, is in aid of the restoration of the stonework on the church tower. The trees have been decorated to the theme of “poetry and prose” by families, community groups and businesses.

The Friends of Watlington Library based their design on Robert Louis Stevenson’s Treasure Island, complete with cardboard galleons, pirates and treasure chests.

The Royal British Legion’s tree is based on the First World War song Keep the Home Fires Burning and features a large cut-out soldier, postcards from the era and a tableau of a family dressed in Edwardian clothing sitting around a fireplace.

The Women’s Institute used the William Wordsworth poem I Wandered Lonely as a Cloud as the basis for its tree decorations featuring cardboard clouds and daffodils.

Watlington in Bloom designed a tree around the poem Forefathers, by Edmund Blunden, decorated with photos of old buildings in the town.

Watlington Environment Group’s watercourses project used the German poem The Trout as the inspiration for its tree, complete with a gravel stream bed and fish.

Hundreds of pounds was raised over the opening weekend of the festival, which is organised by the Friends of St Leonard’s.

Janet Vaughan, who chairs the group, said: “There was a good turnout and from my point of view it brings all the community into the church, all age and interest groups, which is really magnificent.

“People put so much effort and time into doing it year on year, which is just amazing.”

The festival runs from 2pm to 5pm daily until December 23.

The trees were supplied by the Tree Barn in Christmas Common.