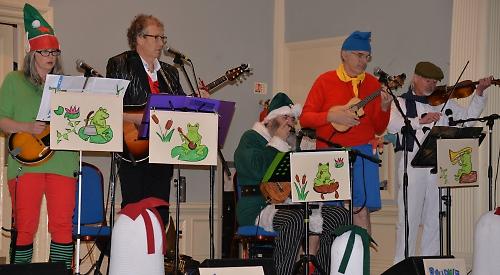 THE Congo Frog Boudoir Band were the stars of the 15th night of the Henley Living Advent Calendar.

The seven-piece group played a collection of festive and classic songs to a crowd of more than 50 people in the main room of the town hall last night (Friday).

Richard Rodway, who chairs the calendar, led a countdown from five before the band emerged from a door on the stage.

They opened with Dominick the Donkey and got the crowd to join in, while Mr Cooper’s son Eddie, 10, donned a donkey mask and danced around the hall.

This was followed by Rockin’ Around the Christmas Tree, Last Christmas by Wham!, Merry Christmas Everyone by Shakin’ Stevens, YMCA by the Village People and Slade’s Merry Xmas Everybody.

They then performed an encore of Dominick the Donkey.

Mr Cooper, who has already performed on the second night of this year’s festive fundraiser with the Hairy Molly Barn Dance and Ceilidh Band, told the crowd: “We’re delighted to be taking part in the living advent again. Thank you so much for coming out.”

After the performance Mr Rodway said: “I’m in the presence of greatness! That was fantastic.

“It was about time these guys had a proper stage and they showed what they could do with it.

“It was just non-stop fun and you could see the reaction from the audience. You always know you’re getting something quirky and fun with Martyn.”

The evening was raising money for the Riverside Counselling Service, which offers support to people aged 12 and over in Henley and the surrounding area.

Tonight’s performance (Saturday) will be held at Corner 81 at Henley Rugby Club, off Marlow Road.