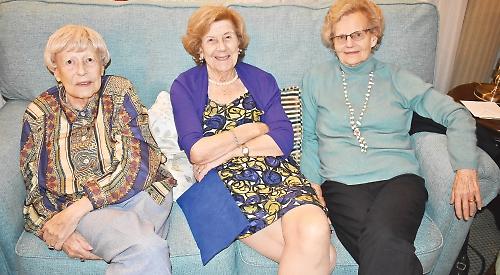 RESIDENTS of the Thamesfield retirement village in Henley enjoyed a Christmas performance by members of singing group Nottakwire.

The 24 singers from Sonning Common were conducted by Elaine WIlliams and accompanied on the piano by Margaret Moola, who co-founded the group.

They sang The Carol of the Bells, Little Drummer Boy, Silent Night, Do You Hear What I Hear?, Christmas Candle and Where The Stable Light Shines.

After the performance, they chatted with residents over tea or coffee and mince pies.

There was then a sing-a-long of Christmas carols.

The afternoon was organised by Nottakwire members Barry and Jeni Wood, from Peppard, who have friends at the home off Wargrave Road.

Miss Williams said: “It was a lovely afternoon and the music sounded brilliant as the room had excellent acoustics.

“It’s great to perform for such a receptive audience and we could tell from their silence that they were intently into it.”