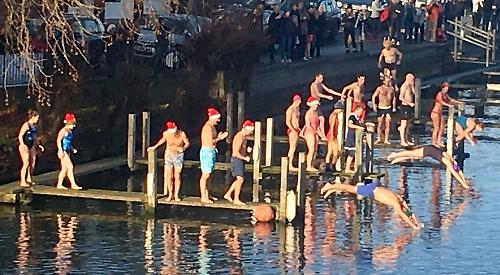 TWENTY-NINE swimmers braved temperatures of 5C as they swam across the River Thames in Henley on Boxing Day.

The group paddled about 70m from the landing stages near Red Lion Lawn to the Leander Club pontoon on the opposite bank.

They all wore traditional bathing costumes rather than wetsuits and many of them wore festive headgear such as Santa hats or reindeer antlers.

Participants met for a drink at the Angel on the Bridge pub before climbing into the water at noon, watched by friends and family from the banks and the bridge.

The annual event, which is now in its eighth year, is organised by the Heller family, from Skirmett, who took part and provided swimmers with whisky and ginger wine cocktails afterwards. Siblings Beatrice, 31, Rosie, 27, and Doug Heller, 33, and their mother Mandy, 63, were among those taking part along with Beatrice’s partner Jonathan Butt, from London, who was doing it for the first time, and the siblings’ cousin Henry Collett, 31.

They were joined by their friend Oliver Browett, 45, from Harpsden, and a group of his friends including Laura Reineke, the founder of Henley Music School, who was taking part for the second year running.

The number of swimmers was up on last year’s total of 18 but failed to meet 2015’s record of 52 after several people pulled out due to the low water temperature. Beatrice said: “It was probably our second coldest year as it has often been 9C or 10C, although it was only just above zero the first time we organised it.

“However, it was lovely and sunny and we had lots of people lining up to support us.

“I think word has spread because we had quite a few newcomers and one person had come all the way from Chiswick.

“There was also someone who’d only just moved to Henley but signed up when they heard about it.

“We certainly had more spectators than in previous years.

“Several potential swimmers were put off by the water temperature and opted to carry bags and take photos rather than take the plunge. However, for those of us that did leap in, the water was calm and bracing and the group photograph at Leander Club offered an excellent opportunity to warm up with a giant group hug!

“Jonathan enjoyed taking part, although he’s now used to it as we swim together all the time and I’ve indoctrinated him into the world of cold water swimming.

“The great thing is that this has spread far beyond our family and I’m pretty confident that it would continue even if we weren’t able to take part for whatever reason next year.”

She said: “It was fun and the temperature wasn’t too bad considering it was about 1.5C earlier in the week. The flow was pretty quick.

“My first swim was tough as it can really take your breath away but when you’ve been doing it regularly you become acclimatised to the water.”

The Hellers launched the event in 2010 and it has been repeated every year except in 2012, when the Thames was in flood and it was too dangerous to proceed. Instead, the family staged an informal dip in Hambleden brook.