We love being firefighters as much as we do each other 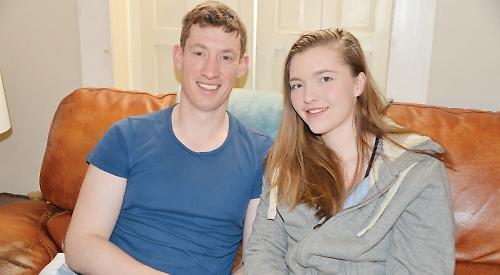 WORKPLACE romances are often frowned upon — but two of Henley’s newest firefighters say they come as a package.

Jason Evans, 29, and Lizzie Ward, 24, have worked at the West Street fire station as retained firefighters for six months and attend almost all call-outs together.

The couple close by, looking after a property that belonged to his late grandparents, Richard and Margaret Hylton-Smith.

Mr Evans, who works part-time as a supervisor at Fat Face in Bell Street, spent two years as a firefighter at the station from 2010 to 2012 when he previously lived in Henley.

So when he moved back following the death of his grandmother, he decided to sign up again and persuaded his girlfriend of four years to join him.

Mr Evans said: “As soon as we came back to Henley it was pretty much on the cards.

“The crew has had a couple of changes but there’s a core group that’s still here and there’s a real team environment and it’s very inclusive.

“We do feel a bit like a family — everybody knows everyone else.

“The station itself is very homely so you do feel part of something and take pride in being that team.”

Miss Ward, who is a rowing coach at Radnor House School in Twickenham, said: “Jason constantly talked about the fire service, saying how great it was and how he wanted to go back and even showing me pictures. I think he was brainwashing me!

“Because he built it up such a lot, I started to convince myself to do it. I’ve always liked the idea of being in a service but I thought it might be the police.”

The couple signed up in October last year and completed all the necessary training courses together before starting work in April.

Miss Ward said: “There’s a bit of competition between us. If you get a shout at night you sort of wake up and say, ‘Oh God, it’s ’ but because we’re in it together we wake up and run across the road. I really, really like it, so much so that I could see myself doing it full-time, which is something that didn’t even cross my mind when we were going through the application process. It’s extremely rewarding.

“I really like the group of people and I think we’re so lucky to have a station that does gel together.

“I’m the only girl but I don’t actually notice — you just feel like a firefighter and everything that comes with that.

“I was worried I wouldn’t be able to do it, physically or mentally, but you get great support, not just in the service but the station itself.” Mr Evans said: “I actually enjoy it more this time around because Lizzie and I can share it together. We come as a package.

“It’s actually easier to have someone working with you. When that pager goes off I go screaming out the door whereas Lizzie says, ‘I bet he’s forgotten something like his keys!’

“We’re now breathing apparatus qualified, which makes us a bit more useful than a chocolate teapot. We can go into a burning building if required to do so.

“You’re there to help people and that’s the rewarding part. I don’t think we’re different from other people who go around helping the community.

“This is what I want to do as a career.”

Retained, or on-call, firefighters, who make up 60 percent of Oxfordshire’s operational fire and rescue service, have other jobs but are available to answer an emergency call.

Potential recruits are not only interviewed but have to undergo practical assessments, psychometric testing and a medical.

If you’re 18 or over and live or work within close proximity of a fire station, you can apply.

For more information, call Nick Windsor, watch manager and station support officer for Henley and Watlington, on 07775 827256 or visit www.oxfordshire.gov.uk/oncallfirefighters

A drill night is held at Henley fire station every Wednesday from .