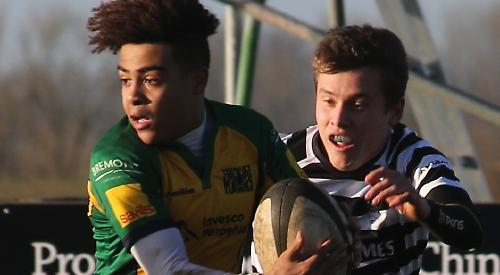 IN an often riveting encounter that featured both pulsating attacking movements and resolute defence, Henley Hawks Colts were beaten 32-22 in their National Cup match at Chinnor on Sunday.

Henley not only played into a bitterly cold wind but absorbed considerable pressure in the opening 10 minutes against determined opponents.

It took a good backline movement, spearheaded by Ben Stacey, Rhys Edwards and Cameron Sommerville-Bailey to enable Henley to enter Chinnor’s half of the field for the first time.

From the ensuing line-out, Henley flank Alex O’Brien powered his way past several defenders to score a well-taken opening try.

Another demanding period followed whereby Chinnor hammered at the Henley line, eventually breaching the defence with a try under the posts that was converted.

Good driving play from Alex O’Brien, assisted by Tom Priestley, Ed Houghton and Matthew Kernick, set up scoring opportunities for Henley but it was Chinnor who went further ahead when they were awarded a penalty after a counter-attack. Henley began the second half impressively and a period of sustained attacking play earned them a penalty which Jamie Winch converted.

The next 10 minutes were influential in the course of the match as the momentum shifted in Chinnor’s favour and with greater possession they were able to establish a commanding 17-point lead through two further tries – one converted – and a penalty.

Henley fought back doggedly and, after several forceful breaks down the right flank, Callum Brady was rewarded with a try to make it 25-15.

However, hopes that Henley might stage a dramatic finish to the match were shattered when Chinnor broke through the midfield to score their fourth try.

There was time for a last piece of clever midfield interplay from Henley that culminated in the outstanding O’Brien crashing over for a second try that was converted by Winch.