The adventures of Tony, the wind-assisted spacehopper 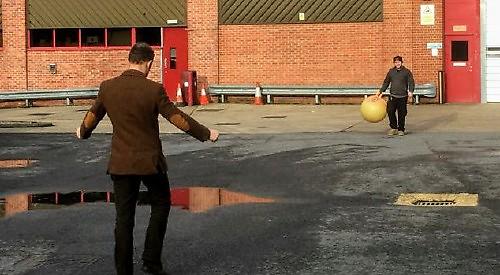 Tree were felled and garden fences were in winds of up to 90mph and flood warnings were issued due to the heavy rainfall.

Matt was most concerned about the loss of Tony, the spacehopper beloved by his children, Felix, 10, and Didi, eight, which went missing from the family’s home in Deanfield Avenue, Henley, during the night.

He appealed for help online, saying: “Sadly, during last night’s storms, our back gate was blown open and Tony, our beloved spacehopper, became bewildered and bounced off into Henley where he is now lost, no doubt distraught without us, wanting and yet unable to find his way home.”

The Facebook post included a description of Tony as “a big orange blow-up ball with two horns popping out of the top of his head”.

Matt said his family would be “incomplete” without Tony. Twenty-one people shared the post, including one person from Holland.

Fortunately, it took only two hours for the family to be united with Tony, who had ended up in the Stuart Turner yard in Greys Road and was found by employee Liam Yeo.

Matt said: “Tony had travelled literally thousands of centimetres of his own volition, rolling out of Deanfield Road, veering right, no doubt indicating with his right horn, before bounding keenly down Deanfield Avenue in order to gain enough momentum to make it uphill on to Greys Road.

“From there it’s clear he bounced left and then made hastily for the centre of Henley but became distracted, probably by the appeal of the large open space in the yard at Stuart Turner.

“We were reunited with an excited but, as you can see from his expression, a more than slightly sheepish Tony.

“Thank you to everyone who responded so promptly to our call for help. 2018 is already saved.”

Liam said: “I’m glad we managed to get him home safe. Thank you for the giggle!”

And Tony? He made no comment but perhaps he was too pumped up!