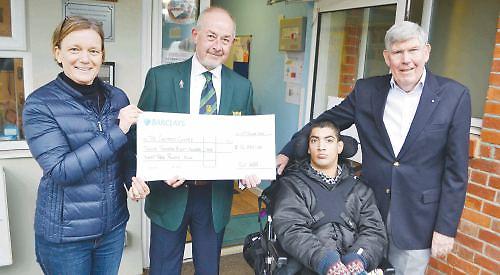 A CHEQUE for £13,000 has been presented to the Chiltern Centre for disabled children in Henley by the captain of Badgemore Park Golf Club.

David Haddock raised the money during his year in office, which ended this month.

He organised a number of fund-raising events, including “Captain Haddock’s Longest Day Challenge” — a reference to the character from The Adventures of Tintin — on June 21, when he played 101 holes in just over 15 hours in temperatures that reached 33C. This alone made £3,300.

Another £2,000 was raised at a charity auction while throughout the year Mr Haddock had a charity bunker on the course whereby every player whose ball landed in it had to donate £1.

Mr Haddock said: “I’m extremely pleased. There are no words to express how generous the members have been — they have been absolutely fantastic.”

He chose to support the Chiltern Centre as it is a small, local charity helping children in need. Mr Haddock said: “I’ve got four children and two grandchildren and they are all happy and healthy with not a care in the world so I wanted something that dealt with kids.”

Paul Barrett, chairman of trustees at the Greys Road centre, said: “It’s a tribute to the golf club and its membership supporting their captain in such a magnificent way.

“It’s a huge tribute to David personally for the commitment he made to achieving an extraordinary total.

“I can’t think of many individuals who would have shown that degree of commitment to the cause. We are extraordinarily grateful.”

Liz Deacon, community fund-raiser for the charity, said: “We really enjoyed working with David and it is a really friendly golf club.

“We need £200,000-plus to keep the centre open each year and pressure on grants is getting tighter so support such as this is becoming more and more important.”