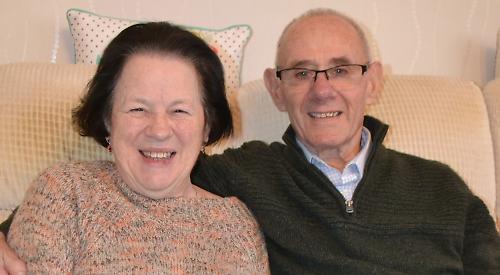 A MEMBER of staff at the Waitrose store in Henley is retiring after almost 33 years with the company.

Keith Churchill-Coleman, 75, who works three mornings a week on the customer service desk, will finish work next Friday.

He previously held jobs as a security checker, where he unloaded lorries, and in the store’s audit team.

Mr Churchill-Coleman lives in Mount View with his wife Susan, 72, and the couple have 11 children.

He joined the business in 1985 when the store was based in Bell Street where the Strada restaurant is now located. The supermarket moved to its current purpose-built premises in 1994.

He had previously spent nine years working at the Sam Cowan betting shop in Station Road, which is now the offices of accountants Kench & Co, and seven years as a milkman. Mr Churchill-Coleman recalled: “I heard there was a vacancy down at Waitrose for a security checker so I applied for it and got it.

“I enjoy working with the people there. That’s the part I’ll miss, especially after all these years, but at the same time, I’m glad I’m retiring.”

When he turned 65 he moved on to the customer service desk which meant he could go and watch Reading FC play on Saturdays.

Mr Churchill-Coleman explained: “I used to work every other Saturday. I always said ‘when I get to 65 I’m not working Saturdays!’ and I’ve not worked one since. I always try to go out of my way to help customers as it’s part of the job. If somebody comes in and has a moan, it’s not personal.

“You do get a good feeling when somebody has come in with a problem and you have helped them out and they have gone away satisfied — you feel satisfied as well.

“Some things were better in the old store, some in the new, but you’ve got to move with the times otherwise we’d still be burning oil lamps.

“As much as we all complain about the places we work from time to time, Waitrose is a good firm to work for.”

Mr Churchill-Coleman was born and has lived in Henley all his life.

“I wouldn’t choose to live anywhere else,” he said. “If I won millions of pounds I’d still choose to have a second house here.”

He and his wife plan to have a family holiday in Majorca later this year. The couple have seven daughters and fours sons as well as 17 grandchildren.

Mr Churchill-Coleman was born in Niagara Road and was 17 when he met his wife at Trinity Youth Club in Trinity Hall, Harpsden Road, in 1959.

They were married at Holy Trinity Church four years later and will celebrate their 55th wedding anniversary in March.

They have lived in Mount View for 40 years and previously had homes in Queen Street, Greys Hill and South Avenue.

Mrs Churchill-Coleman worked at the Brylcreem factory in Cox Green, near Maidenhead, and at the Timothy Whites chemist and hardware store on the corner of Bell Street and Hart Street, which is now the Monsoon store.

She said she would be pleased to have her husband home all the time.