How I'm coping with losing my husband 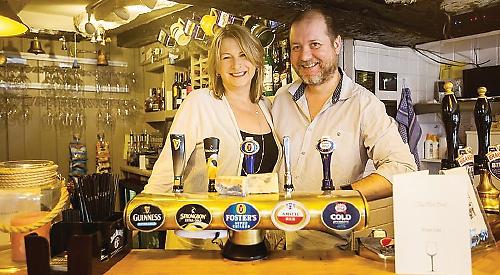 PAM MYLES-HOOTON can’t bring herself to watch her wedding video.

It was delivered the day after Rob, her husband of just less than six months, died.

Yet there isn’t a day that she doesn’t think of her lost love, visiting his grave every day since the tragedy a year ago on Tuesday.

She has also found distractions to stop her being overwhelmed by grief, such as feeding goats at an animal sanctuary.

“I love and miss Rob so much,” she says.

The couple had been running the Old Bell pub in Bell Street, Henley, for two years when Mr Myles-Hooton died, aged 41.

He was working on his boat Lola Belle at the Hobbs of Henley boatyard off Wargrave Road when he suffered a fatal brain haemorrhage.

He was laid to rest at the woodland burial ground in Rotherfield Greys and now his 52-year-old widow visits his grave every day, usually accompanied by the couple’s Chinese crested dogs, Lucy and Sassy.

On July 30 last year, when the couple should have been celebrating their first wedding anniversary, Mrs Myles-Hooton went three times, twice with the dogs and once on her own when she fell asleep.

She recalls: “I didn’t know what to do that day. I kept going back to him, first with the dogs and then without. It felt like the right thing to do.”

Visiting the grave has been one of the ways she is learning to cope with her loss.

Another is the two silver necklaces that she wears and never takes off.

The pattern on one makes up the fingerprints of her late husband and she runs her hand along it whenever she needs a moment of relief when thinking about him.

She had the necklaces specially made by Lawson’s goldsmiths in Duke Street and another for her mother-in-law Ann Hooton, who lives at Swiss Farm, Henley.

The women came up with the idea after taking Rob’s fingerprints shortly after he died.

Mrs Myles-Hooton says: “When I’m going through something at work or something where I’m having a tough time, I hold the necklace.”

She also wears her husband’s wedding ring on her thumb. It was reduced in size to fit and the excess platinum was used to make a heart for one of the necklaces.

She says she has also found it useful to wear some of her husband’s clothes occasionally.

“I have two or three of his favourite shirts,” she says. “At first I was wearing them all the time around the house. It might sound weird but it helps me.”

One shirt went with her when she went back to work after four months of compassionate leave.

She is director of clinical studies at the Charlie Waller Institute at the University of Reading, where she oversees training in psychological therapies to make sure it improves clinician knowledge, skills and patient outcomes.

Mrs Myles-Hooton says: “I had to go up to London for a meeting at the Department of Health.

“I could not wear the shirt but I took it in my bag and put it on the back of my chair.

“This was from advice given to me by a counsellor at Cruse in Oxford. Other people might find that kind of thing helpful too.”

She has also found her enthusiasm for cooking has returned after she lost interest for several months.

The couple had worked as a team in the kitchen at the Old Bell and planned to leave the pub and open a vegan café in Reading.

She says: “We were a great team. I would make things you could prepare beforehand like desserts, then Rob would be in the kitchen on the night and I would do front of house. It was just not possible to do it without him.

“My passion for cooking is coming back to me now and I am able to cook for friends. Now I’ve got my cooking mojo back, that and baking are one of my main strategies for coping.”

Following her husband’s death, Mrs Myles-Hooton faced the prospect of moving out of the pub, which is owned by Brakspear.

She says the company gave her plenty of time to find somewhere to live, which she did in late March when she moved into a house in Singers Close.

She could not face packing the boxes herself and left it to the removals company but she hasn’t unpacked a lot since moving.

“Two rooms and a garage are full of boxes,” she says. “ I haven’t seen my vacuum cleaner, iron or hairdryer since I moved. I’ve managed by borrowing off friends.

“The grief takes over your life. There is nothing else but your grief. It’s not the life I wanted for us. It feels like part of me died and I’m not the person I once was.

“I have started to build around my grief.

“At first I could not go out, I would say ‘yes’ to people and then not go because I was too anxious. I can smile and laugh at things now but there is still an ongoing sense of acute loss.”

Since moving out of the pub Mrs Myles-Hooton has not been back to Bell Street.

She also avoids Wargrave Road and struggles with walking near the river as it reminds her of where her husband died. “I’ve started going into Waitrose again and I go in the health food shop,” she says.

“I’m doing a lot more than I was but it takes time.

“I have so many feelings around the town hall. We worked with them on the funeral and six months before we were doing the same with the wedding.

“I find places like that so painful because of the links and all the memories.

“I’ve heard this from other widows — it’s not going out which becomes the problem but coming back to an empty house, especially in the winter. I was used to going back to the pub with bright lights and noise.”

A place Mrs Myles-Hooton does feel comfortable is Pizza Express in Market Place, where she and Rob would often go to eat. “The staff there have been so kind,” she says. “They let me go and sit upstairs alone as I couldn’t deal with the crowds.”

In September she began thinking about what to do on Christmas Day as she wouldn’t be celebrating it with her husband.

She had invitations to spend the day with friends and family but wanted to avoid anything where she felt like he was missing.

She contacted the Oxfordshire Animal Sanctuary in Stadhampton about volunteering.

“I got in touch at first to ask about Christmas Day,” she says. “The first response was ‘no, not really’ as they don’t take volunteers just for Christmas Day.

“Then I explained my situation and waited a couple of days and they said it was absolutely fine.

“I didn’t want Christmas Day to be my first day so I started going beforehand and I loved it. I spend time with the rabbits, cats and dogs but I love hanging out with the goats. I’m really, really happy whenever I go there.”

Mrs Myles-Hooton goes to the sanctuary on most days that she is not at work and she often takes cakes with her for the staff and other volunteers.

She goes to the Tesco in Henley to ask for banana skins, which are one of the goats’ favourite snacks.

“It’s something I look forward to doing,” she says. “Normally it’s just for an hour or an hour-and-half.

“It has been incredible for me and I’ve got to know the staff really well. They are all really kind and compassionate people.”

Despite planning ahead, Mrs Myles-Hooton did find the festive season difficult.

She did her best to avoid reminders and twice she had to walk out of the Tesco store as she could not deal with the Christmas music.

To avoid Christmas adverts on television, she would record the shows she likes and then fast forward through the commercials.

“I had planned for Christmas Day,” she says. “A friend stayed with me and was there for breakfast, then I went to see Rob, went to the animal sanctuary and then back to see Rob again.

“Some friends came over for dinner but there was nothing Christmassy about the place. I told people I didn’t want cards or presents.

“I used to love Christmas; I was Mrs Christmas. I got the lights out ridiculously early. I would turn the pub into Santa’s grotto.”

Mrs Myles-Hooton spent New Year’s Eve with friends in Henley. She stayed until just before midnight and then took her dogs out.

As it turned midnight she was walking the empty streets of the town, which she found peaceful.

She says: “If people had been running around saying ‘Happy New Year’ that would have been worse.”

New Year’s Day was more difficult. When the couple ran the Old Bell they would hold a “recovery club” to help customers with sore heads after overindulging the night before.

“I would write a quiz and we would have live music,” says Mrs Myles-Hooton. “Then me and Rob would go for a meal together. It was a hard day this year.”

As she looks ahead, Mrs Myles-Hooton is expecting more tough time emotionally.

She says: “Rob was part of 2017 but he’s not physically going to be part of this year and we won’t be creating new memories.

“His death left a big hole because I love my Rob. He was the perfect person for me. I’m sure everybody says this but he was the most fabulous, amazing person.

“People say time is a great healer but it’s not. The grief is exactly the same but you learn to build around it and create a life around it.

“At first I wanted to die and be with him. I’m sure there are others who have felt like that. When you lose someone so close to you, you can’t imagine life without them. I was grief-stricken. I can’t begin to describe it.

“Now I’m not crying all the time and all day, although I do cry at some point every day.

“When I reflect on the last year I can see I am building a life around my grief and finding a new way for myself.”