At last, I'm back home 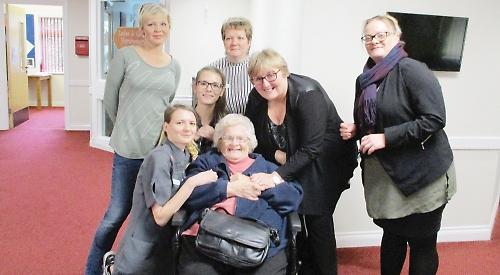 A DISABLED woman who was left feeling isolated after being put into care 20 miles away from her family in Henley has finally come home.

Betty Thatcher, 85, was moved into the Chilterns Court care centre in York Road on Monday after 10 months away.

She had been living in The Meadows care home in Didcot, where she was taken as she had been struggling to look after herself at home in Gainsborough Crescent and needed
24-hour care.

Her family were told she would be there for only a few weeks but she ended up staying longer because a place in Henley, where she has lived her whole life, was not available.

In October, they appealed to Oxfordshire County Council, which is responsible for adult and social care, to have her admitted to a care home in Henley.

They claimed that staying in Didcot was bad for her health and was putting a strain on them because of the travelling and worry.

The family were told that a place had finally become available at Chilterns Court on January 3.

Mrs Thatcher’s room was specially decorated by her daughters Emma Thatcher, 47, and Kim Bradley, 63, at the weekend.

They displayed a number of personal items, including family photographs, which had been in storage since she moved out of her home of more than 30 years last year. There was also a teddy bear, pink balloons and flowers to welcome her.

The room is next to a large tree, which often has squirrels running through it, so Mrs Thatcher can watch them from her window.

“When I found out the room was available I just wanted to dance,” she said. “I did fear something could still go wrong as I’m the sort of person who can panic a bit.

“When I came into the room I could not believe what they had done. Having the family things around makes me know I am home.

“The family have all been brilliant. I’m not used to it yet but I am home with my family here and I am able to see everyone.”

Mrs Thatcher’s son David, 65, of Gainsborough Crescent, said: “When we rang her to say she got a place she was so, so, so happy.

“Now it’s like having her back home. She is next door and not far away. Mum can’t get the smile off her face.”

Mr Thatcher and his sisters had hoped to move their mother shortly after her place at the care centre was confirmed but they had to wait several more days due to an outbreak of Aussie flu at the home in Didcot.

Mrs Thatcher, who struggles to walk due to pain in her hips from operations many years ago and suffers from arthritis, did not contract the illness but there were concerns she could be a carrier.

Mrs Bradley, of King James Way, said: “The home was on shutdown and nobody was allowed to go in or come out. While we waited, me and Emma were shown around Chilterns Court and three different rooms.

“Being cheeky, we asked if she could have room 44, which is on the top floor and has sun shining through the window, so it is really bright.

“The staff were brilliant and sorted it out for us.”

Mrs Thatcher’s children had been desperate to have her moved back to her home town.

They said her living so far from family was having a negative effect on her health and she was suffering with low morale as her friends in the town could not get to see her.

Mrs Thatcher was moved up and down the waiting list as people with more immediate needs were given vacant places.

Her family continued to press the council and the Orders of St John Care Trust, which runs both care homes, for progress. Miss Thatcher, an army veteran who lives in County Durham, said: “I wrote a letter of complaint about social services, telling them the whole story, in December.

“From there they were apologetic and said it should not have taken as long as it did. I was told she was top of the list and would stay there. When they told us she had a place we weren’t sure whether to believe it.”

Mrs Bradley added: “When we found out it was just a feeling of
disbelief.”

Now Mrs Thatcher is back, she will receive daily visits from family and friends and she will be able to be taken into town to the shops and the markets.

Mr Thatcher said: “Whatever she wants to do, we can take her out and bring her back easily.

“When you live in a place like Henley you get a bond with it but she hasn’t been able to see the changes to the town while she has been away. It seems like a simple thing but it’s those things which make life a bit easier.”

Miss Thatcher added: “Mum’s friends have been asking about how she is and when she is going to be back. Now she will be able to see them and they can come to visit.”

Mrs Thatcher, who was a dinner lady at Valley Road Primary School for 21 years, thanked the staff at the Meadows.

She said: “The girls who work at the home were brilliant and all really happy for me. They gave me a great send-off with flowers, a card and chocolates.

“I had a photo with all the staff in reception when I was saying goodbye. There were lots of tears and emotion.”

Mr Thatcher said he hoped raising awareness of his mother’s plight would help others.

“There may be people in a similar situation where someone is moved where they don’t want to be,” he said.

“This shows if you stick with it you can get the resolution you want.

“This is a happy ending and it’s refreshing to see something get put right in the end.”