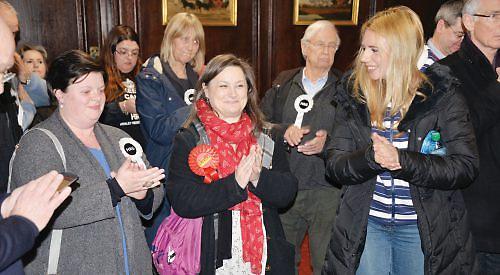 HENLEY’S newest town councillor says she is honoured to be chosen to serve.

Conservative Donna Crook won a by-election with 577 votes, beating Paula Isaac, of Henley Residents Group, with 484 votes and Jackie Walker, of Labour, with 131. The turnout was 28 per cent.

The trio were contesting the seat in the Henley North ward left vacant by the resignation of Conservative Simon Smith in November.

It means the make-up of the council is now eight HRG members, seven Conservatives and one Independent Conservative.

It also marks a recovery for the Tories after they lost two
by-elections and control of the council in May last year.

Matt Gaskin, deputy returning officer for South Oxfordshire District Council, declared the result at the town hall just after 11pm on Thursday last week just over an hour after the polls closed.

There were cheers from the Conservatives and their supporters as the result was announced in the council chamber and the candidates congratulated one another.

“I thought ‘this is a dream’ because I don’t think the Tories have won a by-election for a very long time. It’s a big accomplishment for me and for them.

“Running up to the election I had such a good response from people coming up to me in the street and as I knocked on doors.

“I’m grateful to everyone who voted for me and I’m glad they put their faith in me. It’s an honour and a privilege. Now I really want to get on with the job and work with everyone.”

Ms Crook, who stood unsuccessfully as an independent in last year’s by-election in the North ward, added: “I did say ‘sorry’ to Paula that I beat her. I feel for her because I know what it’s like to lose.”

She also thanked her partner Rob Peters, daughters Amber, 25, Katie, 22, and Olivia, 18, and Frank Browne, chairman of Henley Conservatives, for his support.

Ms Crook, who works as a cleaner as well as running a craft business, campaigned for more police on the streets to help deter antisocial behaviour and pledged to help improve public transport and tackle air pollution by reducing the number of cars on the road.

Two years ago she campaigned to save Henley’s bus services following Oxfordshire County Council’s decision to axe all its bus subsidies.

Ms Crook said: “I want to do lots of good things and that was my main reason for standing. I do feel passionate about helping people.

“Everyone has got to learn and start somewhere and I will try my hardest. I’m very much looking forward to it — they might have trouble trying to shut me up!”

Mr Browne said: “I thought the result was going to be closer.

“Henley Conservatives are working hard to change our approach and I thought this by-election was possibly a bit too early for us because I wasn’t convinced we had got that message across to the residents.

“But I think our candidate was first class — she stood head and shoulders above the other two. It’s probably on the strength of Donna that we have won this and I’m absolutely delighted.

“The victory goes deservedly to her but also to the small but really dedicated team that was behind her.”

Councillor Julian Brookes, leader of the party on the council, said: “It’s great to have a new member of the team and this gives us seven Conservative councillors again.”

He said the result was particularly pleasing after May’s “debacle”, adding: “Now here we are eight months later winning a by-election, which has to be a significant move in the right direction.”

Mrs Isaac, 38, who co-founded the Gainsborough Residents’ Association in 2013, congratulated Ms Crook, saying: “I’m really thrilled for her and I wish her all the luck going forward as a councillor.

“I would like to thank the HRG team because they have been really supportive over the last few weeks. I think everybody ran the best campaign they could. We had great feedback when we went talking to people, there was no negativity — it was just very tight.”

The mother-of-three lives in Gainsborough Road with her husband Rob and three children and works as a teaching assistant at Badgemore Primary School.

Councillor Sarah Miller, chairwoman of HRG, said she was “very disappointed” at the result but added: “It was always going to be a tough election, with three very strong women candidates in the running.

“But I’m delighted we have another female councillor on board and I know Donna will be a great asset to the council.

“Whichever party hat people wear, at the end of the day, we are all here to serve Henley and to do our best to ensure our town continues to be run efficiently. Henley is a great place to live, so let’s keep it that way.

“I’d like to thank all those who braved the cold to come out and vote and on behalf of HRG I’d like to congratulate Donna on her new role as councillor. We all look forward to working with her.”

Mrs Walker, 51, a former civil servant, congratulated the other two candidates on their success.

She added: “I am happy to have had the opportunity to stand as Labour’s candidate. I enjoyed meeting and chatting with residents during leaflet delivery and getting to know many of the current councillors.

“I would like to say a big thank-you to all who helped and showed their warm support.”