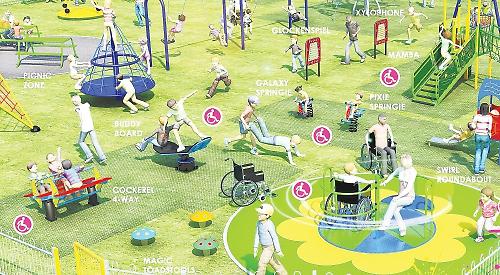 EQUIPMENT suitable for disabled children could be included in a refurbishment of a playground in Henley.

The town council is set to agree a design for a 25m steel cableway, a 4m “pirate’s lair”, a crusader rope swing, a swirl roundabout and a toddler zone at Makins recreation ground, off Greys Road.

This was put forward by Wicksteed, of Kettering, one of two firms shortlisted for the contract for the £80,000 project.

Members of the council’s recreation and amenities committee recommended it ahead of the design put forward by the Children’s Playground Company, of Wolverhampton.

Councillor Glen Lambert said that wheelchair-friendly equipment such as a wide slide should also be included.

“There isn’t a great deal for wheelchair-users in the plans and I’d like to see us add a slide built on a mound,” he said

Town clerk Janet Wheeler said councillors would be able to choose the equipment they wanted, including pieces not made by Wicksteed.

She said: “You choose the supplier and they can supply whatever we want. We don’t have to go with the design — that’s to show what the company can provide. The next step is to have councillors and staff meet with the company and go through what we want.”

Councillors will also consider installing a wet pour rubber surface which could be customised with pictures or designs.

This would be more expensive than the proposed rubber matting, which would allow grass to grow through it, or mulch.

Wet pour was used in the refurbishment of the toddler play area in Mill Meadows in 2014.

Councillor Sam Evans said: “The feedback I got about the play area in Mill Meadows was that the surface was one of the best features because of the safety and the look of it. I don’t want us to cut corners and in a year’s time say we wish we had gone with it.”

The new play area is part of an improvement plan for Makins recreation ground that also involves installing an outdoor gym and the new skate park, which opened in August.

Four companies bid for the contract to extend and improve the facility before being whittled down to two.

The full council will make a final decision next month.