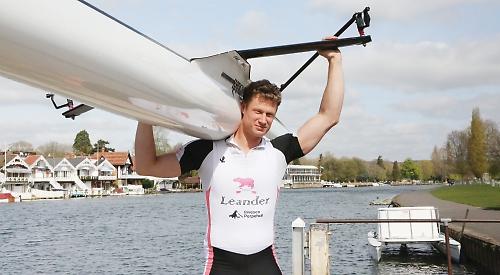 LEANDER Club captain Nick Middleton has resigned and retired from rowing after a 10-year career.

Middleton, 29, who was appointed captain only a year ago, cited lack of motivation as a key factor in his decision.

It comes after he missed the cut for the Great Britain squad at the Caversham training lakes and the selectors sent him home to train.

Middleton said: “I’ve been in and out of the GB squad three times and every time I’ve had to claw my way back.

“Ultimately, I don’t really enjoy it as much as I used to and it’s time to move on.”

Middleton was a national-standard swimmer until 2008 when an injury sidelined him. His physiotherapist suggested he switch to rowing, so he applied to Leander.

His arrival proved the start of a successful rowing career, in which he has won six times at Henley Royal Regatta and represented his country at the U23 world championships and at a clutch of world cup regattas. Middleton, who is an accomplished photographer, is now looking forward to other projects, for which he now has time to spare after spending six days a week on sport since he was just 12.

He said his decision had surprised his friends and family but all had been supportive, including his coaches.

Middleton said: “They understood my decision and wished me luck. Ultimately, people just want you to be happy and successful.” He paid tribute to GB Rowing, which continued his funding despite having sent him back to Leander to train.

Middleton said: “They’ve had the opportunity to cut the funding when I’ve been booted out but they kept it on — you can’t really ask for more than that.

“I joined the sport not really knowing what Henley was in the first place and my goal was always to represent my country but Henley is almost as good as racing internationally.”

His first Henley win was in the Leander quad that won the Prince of Wales Challenge Cup in 2010 but his favourite performance was in the GB double scull with Jack Beaumont in the 2016 season.

Beaumont was picked as the sculling spare for the Olympics in Rio while Middleton was left on the bank.

He said: “They could have chosen me over Jack but you can’t look at it like that because life and sport aren’t always fair and if you keep mulling over a decision that you can’t affect then you’ll always feel some negativity.

“I don’t feel any sense of failure — it’s all about the journey.”

Leander president Jeremy “Rass” Randall said: “Nick is a tremendously personable athlete and a shining example of the sort of attitude that we try to foster among our entire squad.

“Even though he is stepping down from the captaincy, Leander runs in his veins and I know he will continue to be an asset to Leander for many years to come.”

Chief coach Mark Banks said: “Nick started rowing from scratch and yet went on to such a great level of success.

“To win Henley at his first attempt and then go on to five further wins is an incredible achievement.”