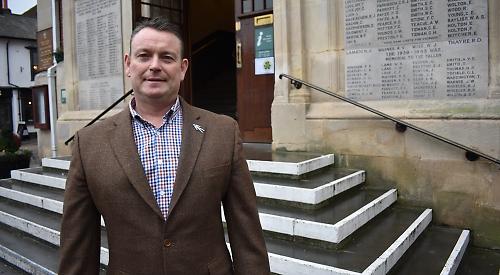 HENLEY’S new town sergeant has resigned after only a few weeks.

Jason Acock, 48, said the job turned out to be not what he had expected.

He said: “I was very sad to resign from my position with Henley Town Council as this was a job which had seemed perfect for me and my family and I had left a very good and secure job to take up this role.

“Unfortunately, the role turned out to be very different from the one set out in my interview.

“There was a big discrepancy with my agreed hours of work, which meant that I was working regular evenings and weekends, far more than expected, and I was effectively taking up a zero hours contract.

“The way in which I was being remunerated also changed.

“As a family man, this made my position untenable and I had no other option but to resign when it was made very clear to me that this would not change in any way.”

Town clerk Janet Wheeler said he provided no official reason for his departure.

She said: “He was a well-respected member of staff. As to his reasons, I’ve no idea.”

She said the job was not being advertised and the council was trialling a job share with existing staff instead in order to save money.

Mrs Wheeler said: “We’ve basically split the job up and several staff have come forward to do various aspects.”

Parking attendant James Churchill-Coleman, who looks after the maintenance of the council’s buildings and security, will now take on the ceremonial aspects of the role. Information centre manager Louise Hastings and assistant caretaker Gill McLellan are also helping out.

Mr Acock replaced Cliff Austin, who retired in September after 17 years in the job.

The former personal trainer performed his first ceremonial duties by helping out at the Remembrance Sunday service outside the town hall in November.

At the time of his appointment he said he thought the job would suit him and wanted to be involved in the community to give something back.

Mr Acock lives in Henley with his wife Julie, a commercial property lawyer, and their two children, George, 10, and Sophie, nine.

The family moved to the town about five years ago from Bristol when Mrs Acock got a job in Oxford.

Mr Acock was head of the road cycling department at A W Cycles in Henley Road, Caversham, for three years and then went to work at the Wormsley Estate, near Stokenchurch, as part of the security team.