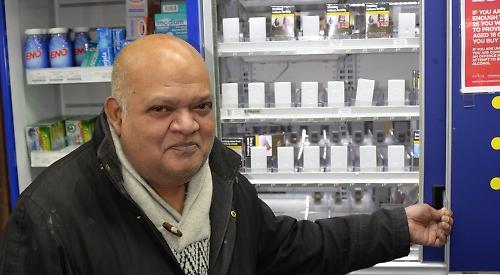 MASKED raiders stole cigarettes worth £5,000 and bottles of whisky from a Henley newsagent’s shop.

The two men used a large piece of discarded masonry to smash their way through the front door of Station News in Station Road in the early hours of Wednesday.

The raiders, who were wearing dark clothing and balaclavas, set off a burglar alarm before clearing out the cigarette kiosk and taking 10 bottles of whisky from behind the counter.

Police cordoned off the front of the shop with tape while the hole in the door was boarded up.

Later in the morning staff set up a table on the pavement outside to sell the day’s newspapers and fresh milk as they were not allowed inside the premises before forensic staff had come to examine the scene.

Shop owner Yogarajah Rajmohan, who lives in Emmer Green, was woken up shortly after 4am by his burglar alarm company informing him of the break-in.

He called his shop manager Ratnam Ratnaraj and asked him to drive to the shop to see what had happened because he didn’t have a key.

Mr Ratnaraj said: “When I arrived the police were here. It had all been smashed and there was glass everywhere.

“They broke the window with a big stone, came in and took all the cigarettes and then ran away.”

He said the shop was fitted with CCTV cameras and that the footage would be handed to Thames Valley Police.

Mr Ratnaraj added: “I’m fed up. I didn’t think this would happen in Henley — it’s a nice area. It’s going to create a cashflow problem for the business. I’m very angry with the people who have done this but obviously they are not from Henley.

“I’ve seen these sort of things so many times but I didn’t think it would happen here.

“Our customers have been very sympathetic.”

Mr Ratnaraj said he had experienced similar raids when he ran a shop in High Wycombe.

He said: “I had a big shop and it happened often there and that was the reason I sold it.

“I came here and I thought ‘Henley’s a nice area’ and the owner is my friend. It’s a nice job but now everywhere is the same.”

Mr Rajmohan, who has owned Station News since 2002, checked the CCTV footage and found the raiders spent no more than four minutes in his shop.

He said: “There were packets of cigarettes everywhere and some whisky bottles were missing.

“The police didn’t allow us to touch anything and I showed them the footage. The two men were wearing full face masks and gloves.

“I’m angry because this is the second time it has happened — the first time was three or four years ago.

“We have got our regulars, we know them and they know us — these are outsiders.”

Steve Ludlow, who lives in Station Road and visits the shop every day, said he hadn’t heard the break-in and only discovered what had happened at 7am when he called in at the shop.

“Really it’s quite something because that sort of thing doesn’t really happen in Henley that often. This is Henley, not Neasden.

“I gave Mr Ratnaraj a big hug when I saw him. At the end of the day it’s covered by insurance and no one was hurt.

“Not only that, but the perpetrators have been caught on CCTV and, in fact, the shops has just had a high definition system put in.”

Thames Valley Police are appealing for witnesses. If you have any information, call the force’s non-emergency number 101.