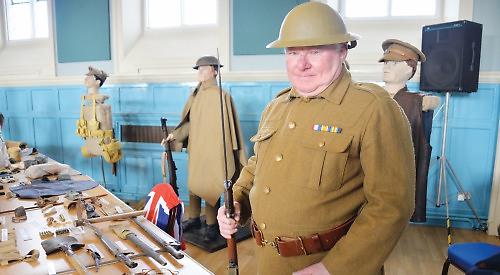 A FIRST World War music discovery day was held at Henley town hall on Sunday as part of a new event.

Singer Patricia Hammond and musician Matt Redman performed songs from the era dressed in period costume and amateur historian Mike Willoughby, from Woodcote, dressed as a “Tommy” and brought his collection of memorabilia from the Great War for visitors to see.

There was also a wartime sing-a-long with the Come and Sing Company and the poem A Shropshire Lad, by Alfred Edward Housman, was set to music by George Butterworth, Tom Appleton and Ben Horden.

Festival founder and creative director Naomi Taylor said: “We wanted to bring really top quality music out of the capital to venues around the Chilterns and we have related literary and arts events. The idea of the discovery day is to explore the context around a particular genre of music and a particular period. With the centenary, we decided to focus on the First World War this year.

“I think it went really well. We would have liked to see more people but it was our first year.”