Coffee house number 15 opens with another on way 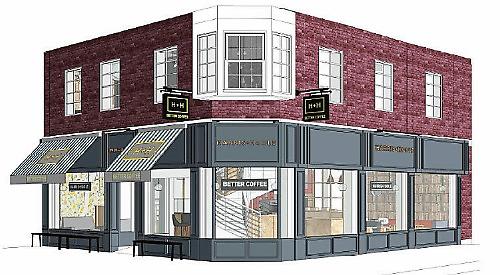 HENLEY’s 15th coffee shop has opened — with the 16th on the way.

Drifters has taken over the former Upstairs and Downstairs tea room in Duke Street, which closed in July.

It is run by Talia Maguire, 25, from Bracknell, and her sister Sophie’s fiancé Cam Wykes, 28, from Maidenhead, who previously managed his parents’ restaurant, Gogos in Windsor.

The café is on two levels with takeaway coffees sold on the ground floor and seating upstairs.

Miss Maguire said: “This is our first venture. Cam has a grip on the business side and I’m more creative. I have a bit of background in marketing but I’ve also done a bit of coffee roasting, which was when I fell in love with coffee.

She said they had discussed opening a business together and decided to take the plunge at a family party last summer.

“Cam originally wanted to open a bar,” said Miss Maguire. “We began to look at finances, saved some money and got a business loan.

“Cam was interested in Henley, as he is from Windsor originally, and we were searching for empty units in Berkshire and Surrey. We stumbled across this building and thought it had a lot of charm. We had never thought about having an upstairs and downstairs but it works to have the takeaway downstairs and the seating upstairs.

“It means the two don’t coincide and people in a rush don’t get in the way of people who want to sit down and have a chat.”

The pair signed a lease in September and have spent £2,000 on refurbishing the property, doing much of the work themselves.

This included creating a recycled wood bar and pallet sofas, attaching old coffee bean bags to the ceiling, putting down flooring in the pantry area and painting the stairs.

Miss Maguire said: “It was a real labour of love. We did everything we could ourselves, apart from the electricity and plumbing.

“We have saved so much in labour — even the lady who did our logo is one of Cam’s friends.” The downstairs shop sells takeaway coffee served in compostable cups as well as reusable coffee cups.

Miss Maguire bakes cakes and pastries for the café upstairs, where the staff include her girlfriend Millie Jeans and Jake the terrier can often be found.

Miss Maguire said they had received a positive reaction since opening on Saturday.

She said: “We opened at 10am and at five minutes to I had a panic that no one would come but it was great, really busy. We met a lot of locals and everyone was lovely.

“People are intrigued. They’ve been coming in to have a nose around and love it.”

The pair want to promote the café as a community space and hope to obtain a licence for live music performances.

Miss Maguire said: “We want to offer a creative space in the pantry, somewhere for people to showcase their artwork and photography.

“We also want to offer hot lunches and somewhere people can come to escape the hustle and bustle of the street.”

Meanwhile, the former Maison Blanc patisserie and café on the corner of Hart Street and Duke Street is set to re-open under new owners. Harris + Hoole, which is owned by the Caffè Nero chain, has applied for planning permission to refit and redecorate the premises.

It says: “This application is for rebranded signage with trough illumination, the addition of an awning and shopfitting of the interior.

“It aims to respect the architectural character, historic fabric and detailing of the original building.

“A proposal of this quality will make a positive contribution to the character and local distinctiveness of the historic environment.”

The application will be considered by Henley Town Council’s planning committee on Tuesday and a final decision will be made by South Oxfordshire District Council, the planning authority, by March 28.

Maison Blanc opened at the former Toni & Guy hairdressing salon in 2009 and closed in March last year following months of uncertainty over its future.

The name Harris + Hoole comes from the names of two characters in a Covent Garden coffee house in the diary of Samuel Pepys from 1664. The brand already has 36 outlets, mostly in London and the South-East.