Romance across the bar 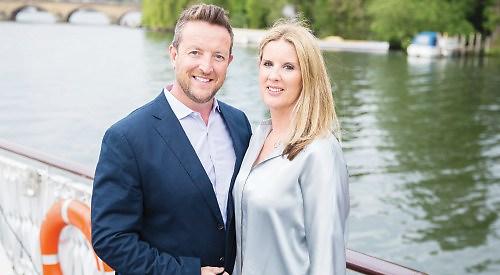 BRAKSPEAR has been running a “pub love” competition, hunting for couples who met in a bar.

The contest was designed to tie in with Valentine’s Day on Wednesday but it was inspired by Jonathan and Suzy Hobbs, managing director and business development manager respectively, of river tour operator Hobbs of Henley.

The couple met at the Angel on the Bridge, a Brakspear pub, in the Nineties.

Jonnie was already working at the family business and Suzy was working behind the bar for then landlord Jeremy Buckler, who now runs The Anchor in Friday Street.

Suzy. now 39, recalls: “I was 18 and at The Henley College and working at the Angel on the Bridge and Jonnie was working at Hobbs.

“I would always be working the Friday graveyard shift between 3pm and 6pm and he would come in after work. We would chat and that’s how we got to know each other. He got to know my friends and I got to know his friends and we would go out for drinks.”

They often went to Stallones in Hart Street and Bensons on White Hill, both of which are now closed.

The couple were married in 1999 at St Nicholas Church in Remenham and had their reception on Temple Island.

Suzy says she laughed when she heard about the Brakspear competition, especially as Hobbs are working with Brakspear to sell Mr Hobbs, the gin launched by Hobbs of Henley last year.

For the competition, Brakspear offered prizes to those couples who came forward with a love story from their “local”.

The winners received prizes including a bottle of Laurent Perrier Rose, a hamper and a gin and tonic for two.

Just don’t tell the Hobbses that it was a Pinkster gin!