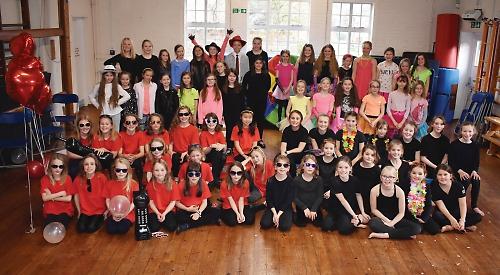 Seventeen girls in Sahara House at Rupert House School in Bell Street, Henley, performed Beat It and Man In The Mirror to take the trophy.

The competition, which had the theme of “Legends”, involved all 70 children in the upper school and the four houses took turns to perform.

The other three houses performed routines to the music of Madonna, Whitney Houston and Stevie Wonder.

The competition was judged by Alison Shawcross, head of the lower school, and Alex Tester, director of music at St Edward’s School, Oxford.

In the solo contest Jemima Brewer won the piano round, while Maddie Tooley was named best singer and Libbie White best instrumentalist. All three were presented with certificates.

Jennie Baxter, the school’s head of music and performing arts, said the children had spent a lot of time putting together their medleys to the music of singers she had chosen.

She said: “They are four of my favourite singers so it was lovely to see the songs being performed so brilliantly by the children. I thught it was absolutely fantastic.

“We have the competition every year and it encourages the whole upper school to focus on music and listen to lots of different types that they wouldn’t hear otherwise.

“It also gives them a real sense of belonging and teamwork.”