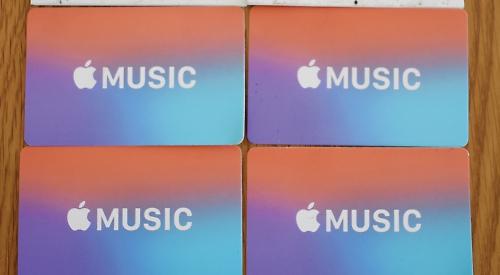 Barbara Carr, of Swiss Farm, Henley, is calling on banks to take action after her son John, 30, who has learning difficulties, spent £396 on Apple music vouchers and she struggled to get his money back.

It took more than two weeks for the technology giant to agree to refund John for the four £99 “all the music you want” vouchers, which he had bought at W H Smith in Bell Street, Henley.

Because of his condition, he did not fully understand what he was buying.

When his mother tried to return them to the shop staff said this was prohibited under the terms and conditions on the back of the cards and they couldn’t refund the money. Mrs Carr, 60, badgered Apple until it finally agreed to help. “The woman I spoke to said it was one of the most difficult cases she had dealt with,” she said. “I managed to get their advisor to understand the gravity of the situation.”

Mrs Carr had to take a photograph of the receipt and get the international bank account number for her son’s account to send to Apple.

The money should be back in John’s account within weeks.

Now she wants banks to put a small logo on to bank cards that notify cashiers if someone has an unseen disability.

She would also like shop cashiers to be trained to help people like her son and to be given prompts during a transaction to check for an unnecessary purchase.

Mrs Carr, an Ofsted inspector and education consultant, said: “What I would really like is for someone in power to represent us in this grey area of the law.

“There needs to be a system to make it harder for vulnerable people to fall into this trap.

“I want the banks to put a logo on to cards which would remind shops to be careful as this customer may need extra assistance.

“The banks could come up with a logo and the card would be signed off by carers.

“As virtual products become more popular, these issues will not go away.” Henley MP John Howell has agreed to take up the issue after Mrs Carr wrote to him.

He replied: “I understand the frustrations you must feel and am delighted that Apple has agreed to refund the money your son spent. Having looked at the issue, I think you are right that there is a point here that needs to be taken forward. As you rightly point out, it affects the vulnerable.

“I will discuss this issue with Treasury ministers and examine how this situation might be changed for the better and what I can actually do.

“It may indeed mean trying to bring in new legislation and I will need to look at how best that might be achieved.”

Mrs Carr said she was glad that John was getting his money back but she wanted to prevent other people having to go through the same experience.

She said: “John’s case has highlighted how easy it is for anyone to fall into the trap. I am banging on about it because I feel extra protection is needed.

“If someone can’t read or has a learning difficulty then there is nothing to protect them in this situation. The people who end up losing money are the most vulnerable.

“There is lack of understanding. When John was younger and we would go into the supermarket I wanted to put a tabard on him, saying ‘please be patient’.

“It should be part of the till training and there needs to be something come up on the till, like when buying alcohol.”

A spokesman for UK Finance, which represents almost 300 firms providing finance and banking in the UK, said: “Banks are committed to helping customers in vulnerable circumstances.

“While requiring retailers to challenge particular purchases may be difficult, there is a number of different products available to help people manage their spending, including text alerts, basic bank accounts with top-up debit cards and prepaid cards.”