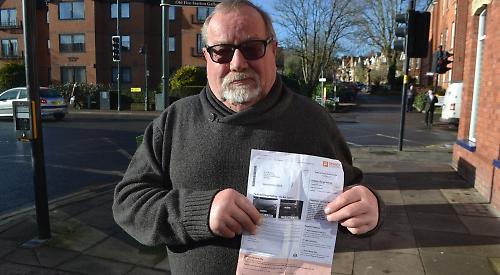 AN elderly man says he felt threatened into paying a £160 parking fine despite it being issued incorrectly.

Franz Matschy, 78, was called by a debt collector after refusing to pay the fine issued at the car park for the Hart and Bell surgeries in Henley.

He says he had been assured by the Hart Surgery that the fine would be cancelled but he continued to be sent letters warning him to pay up before he received the phone call.

Mr Matschy, of Mount View, Henley, said: “I’m not a happy person. At the end of the day I’ve done nothing wrong.”

He is one of dozens of patients who have received letters from debt collectors for fines issued at the car park off York Road. Many of them have been threatened with action by bailiffs or court action, as the Henley Standard revealed last month.

The fines date back to before the surgeries cancelled their contract with car park enforcement company Smart Parking in November following repeated complaints about unfair fines.

Many of the problems were caused by the system requiring people with an appointment having to enter their vehicle’s registration number at a touchscreen in the surgeries’ reception areas in order to obtain up to 90 minutes’ free parking time.

Mr Matschy, a retired car mechanic, was fined after visiting the Hart Surgery on November 11 for an appointment about his asthma problem and spent about an hour there.

He said: “I asked the girl at reception to put my number in because the screen was too little and I couldn’t see it. She booked me in and said it was all right, everything was done correctly.

“When I received the £60 fine I immediately went to the surgery with the letter and asked, ‘what is all this?’ She said, ‘don’t worry, lots of people have had it’ and she would take a copy and it would be the last I heard of it.”

In December, Mr Matschy received a letter from Smart Parking telling to him to pay the fine or face action from debt collectors and then a follow-up letter in January.

He spoke to the surgery again and even tried to unsuccessfully to speak to someone at Smart Parking before he received the call from the debt collection agency.

Mr Matschy said: “I was on the phone to Smart Parking for 40 minutes and didn’t manage speak to anyone so I hung up.

“As I put the phone down, a guy from the debt collectors rang and said he wasn’t concerned about how it happened but he had been told to get hold of this money.

“I felt threatened into paying it and paid him by card there and then. My partner was unhappy — she said I should never have paid the money as I’d done nothing wrong but I believe they can come and clamp your car and I didn’t want that to happen.”

Smart Parking was employed in April last year in a bid to stop the surgeries’ car park being abused by shoppers and visitors.

It used automatic numberplate recognition cameras to track vehicles coming in and out and anyone deemed not authorised to park was sent a £60 fine which increased to £100 if not paid within two weeks.

The company’s contract was cancelled following dozens of complaints from patients about incorrect or unfair fines.

The GPs were able to ask for fines they felt they had been issued unfairly to be cancelled but since the contract ended Smart Parking has not replied to any correspondence, including a letter to the company’s chief executive Paul Gillespie.

Sarah Moberly, practice manager at the Hart Surgery, said she had asked Smart Parking to cancel Mr Matschy’s fine but did not hear back.

She said: “This is the first case we have heard of when a debt collector has telephoned someone.

“We can only apologise again to any patients affected adversely by this scheme, which was introduced with the sole purpose of making the parking situation easier for them.”

Smart Parking is still employed to monitor the neighbouring car park for Townlands Memorial Hospital despite a growing number of complaints there too.