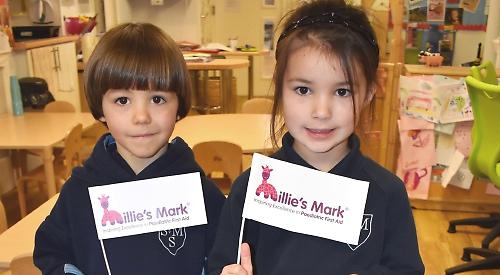 THE nursery department at St Mary’s School in Henley has received an award for the quality of its first aid training.

It is the first pre-school in the town to receive the national Millie’s Mark for ensuring all staff are qualified, which is above the legal minimum of having only one first aider. The school began working towards the award in September after learning about it from other schools in the Cognita group.

“Every teacher and assistant attended a two-day course where they learned to cope with a variety of situations from bumps and bruises to choking and more serious injuries.

The school also had to prove it had conducted risk assessments and show how staff would continue to develop their skills once the course was over.

Ruth Peters, the school’s head of early years, said: “We thought it was a great scheme as it assures parents that we’re the best we can be in that area and aren’t prepared to settle for the minimum standard. Even with the most robust risk assessments, accidents can happen through no one’s fault and it’s reassuring to know we can deal with many different situations and aren’t reliant on one member of staff to come and help.”

The scheme was launched by Dan and Joanne Thompson, from Cheshire, after their nine-month-old daughter Millie died when she choked on food at her nursery in 2012.