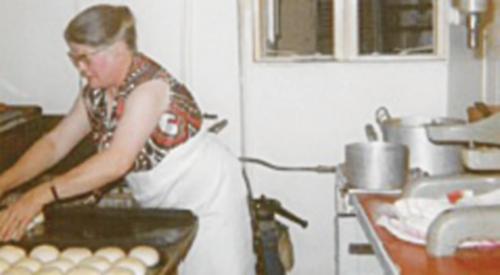 BAKING bread has been in the Martin family for more than 80 years.

Ricky Martin is the third generation of the family to run Patisserie Franco-Belge after taking over from his father in 2004 and is the last traditional baker left on the high street in Henley.

That is why he has publicly criticised the town’s visiting markets, particularly those with an international flavour, saying they are unfair competition for his business.

Mr Martin, 47, has put on hold plans to refurbish his shop and bakery in Duke Street until he has received reassurances from the town council that it will try to help him by increasing footfall.

He says he wants to continue his family’s baking tradition and to invest in the business, which once had two outlets in the town centre and sold 500 loaves a day.

“Everything is very erratic at the moment — that’s the best way to describe it,” says Mr Martin. “It isn’t bad, although I know some retailers are finding it tough.

“With the millennials, shopping habits have changed and it has become harder to predict what they are going to do. Shoppers have become less habitual.”

Mr Martin, who lives in Caversham Heights, says his business is affected whenever there is a market in town with a mobile oven and, like him, selling bread and takeaway sandwiches.

He explains: “Saturday is one of our busiest days but the market absolutely knocks the stuffing out of us.

“Previously, it used to be once a month and we would take the hit but now there are so many markets that it is like a form of taxation.

“They don’t pay any rates and they sell on the fact that it is a novelty. If they had a shop in the town I could cope but that’s not what they are.

“There needs to be a level playing field because there’s only so long that this can remain sustainable. You can’t have your cake and eat it.”

Mr Martin accepts that the bakery trade has changed a lot since his grandfather William opened his first shop in Micheldever in Hampshire in 1936.

W Martin was a bakery and grocers, which Mr Martin says was “mildly successful”.

After 20 years, the bakery’s lease ended and the landlord wanted the premises back, so William and his wife Pat searched for a new shop. They found Patisserie Franco-Belge for sale at 61 Bell Street, Henley, and bought it.

The former coach house is now the home of stone supplier Grama Blend UK, next door to The Bull pub and Bagatelle Toys.

Mr Martin says: “We don’t know very much about how it started but we know it was owned by a Mr and Mrs Lynch and, from what we understand, it was pretty much close to bankruptcy.”

His grandparents used to live above the shop and Mr Martin can recall he and his sister Andrena staying with them and the smell of the freshly baked bread wafting upstairs.

His parents David and Betty-Jean were both working as mental health nurses in Devon when they moved to Henley in January 1970 to work in the family business and at first they lived above the shop. Mr Martin was born in July that year.

He was six months old when the family moved to Blounts Court Road in Sonning Common and his sister arrived in February 1972.

Four years later the family bought the freehold of 12 Duke Street, which became their second shop. Mr Martin says: “Henley was a very different town then. By having two shops we captured business from both ends of town and they didn’t take business from each other.”

William died in 1979 and David took over and he closed the Bell Street shop that year when the lease ran out.

However, he opened another shop in the same street (number 45) as business was booming and this remained until 1992.

Mr Martin, who attended Sonning Common Primary School and Chiltern Edge School in the village, joined the business in 1986, when he was 16.

He says: “We were so busy then that you can’t explain it now — it was the same all day Friday and Saturday.

“The fresh bread was so popular but the world was different then as people went to the butchers and bakers as well as the supermarket.

“Now everything is about convenience and we make all our money from the sandwiches whereas it used to be the bread and being a traditional bakery.”

The Bell Street shop closed in 1992 in order to concentrate on the Duke Street outlet which wasn’t trading as well.

Mr Martin then went to work part time as cabin crew for British Airways. He would spend one month travelling the world and the next month in the shop.

In Duke Street in the Eighties, as well as the bakers, there was also two grocers, at least one butcher and a Wimpy restaurant — very different to the street today with its six charity shops and two coffee shops.

Mr Martin says the changes to the high street were already happening by the early Nineties.

“When our lease ran out in Bell Street we effectively lost our one good shop but closing it meant this one picked up and we managed to pull customers to this side of town.

“Although the town has declined since then, the competition has slowly disappeared. One by one, they have gone and we have had a greater share of a smaller market place.

“In our heyday we would sell 500 loaves of bread a day but now it is about 50 a day and the trade has moved to sandwiches, which we never used to sell.”

The shop sells, on average, 200 to 300 sandwiches a day but considerably fewer on its worst days.

“And our bad days have got a lot worse,” says Mr Martin.

He took over the businss when his father turned 65 in 2003 and is now one of 10 staff, who also include his sister, his long-time friend Christian Alexandrou and Christine Harris, who has worked for the business for almost 50 years.

Mr Martin says: “I guess that it always made sense for me to work here and I am pleased to have done that. I enjoy what I do and dealing with the customers.

“I have a great baker but when he is on holiday I step in and I absolutely love that. It is all I do for two weeks and I just come in early and do the baking. It is so peaceful and therapeutic.

“There is a little community early in the morning, another little world, with people making deliveries and the milkman.

“Then you see people making their way to work when you are already halfway through the day. I get to go home before the rush hour.

“I do think that we provide a service that a lot of towns of this size don’t have. In an awful lot of towns there would be a Subway and a Greggs.”

“Yes, I’d like to stay and keep going but let’s see what happens. I have made peace with the fact that we might go and I am not going to get upset about it. If it’s time to go, it’s time to go.”