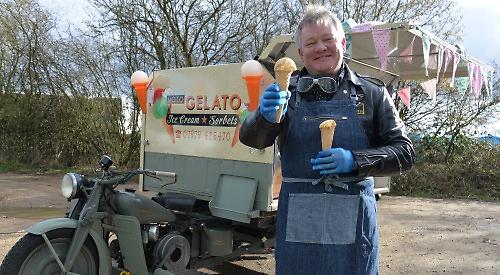 A MAN has been given permission for three-month trial to sell ice creams and sorbets from a vintage Italian tricycle in Henley town centre.

Mike Rogers, of Moto Gelato, has a modified 1948 Moto Guzzi Ercole which he bought in Italy in 2016 and spent a year converting.

He asked for the town council’s permission to operate from Market Place on two or three days a week, saying he would be a talking point and attract visitors.

The council’s town and community committee agreed to give Mr Rogers the trial during the day on a piece of land not currently let by another retailer.

Councillor Ken Arlett said: “I like this idea. It’s something different that might just draw in a few extra people.”

Mr Rogers, 58, from Middle Assendon, unveiled the three-wheeler at Henley Royal Regatta and was also at last year’s Thames Traditional Boat Festival where he said it was well received. He also attended the Christmas festival in December.

He also runs Stovell’s Fish Suppers, selling fish and chips from a van in local villages including Shiplake and Nettlebed.