Car flips over in crash 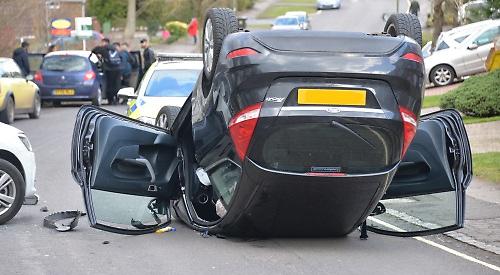 A CAR was flipped onto its roof in a crash on Deanfield Road in Henley.

The black Ford Fiesta collided with a white Volkswagen Polo and a red Volkswagen Golf, which were both parked on the road.

It was travelling in the direction of The Henley College at about 2.40pm today (Tuesday), when residents heard a loud bang outside.

The Fiesta, which is understood to have belonged to a student at the college, hit the front of the Golf and the back of the Polo.

It had a smashed front windscreen. Glass and other debris covered the road.

No one was injured during the incident. Police attended the scene and spoke with witnesses and the owners of the vehicles.

It left the section of road between Tilebarn Close and the roundabout on Deanfield Road closed for more than an hour.