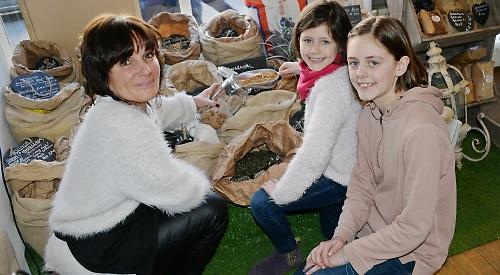 A WHOLE foods store that encourages customers to shop in an environmentally friendly way has celebrated its first anniversary.

The shop sells a range of loose grains, cereals and pasta which customers can weigh out and take away in a paper bag or their own container or purchase glass jars.

Customers can also buy the shop’s tables, chairs, artwork and shelving units as well as homewares.

None of the products use plastic packaging while the takeaway coffee cups are fully compostable as they are made from bamboo. Mrs Tutill, a widow who lives in a houseboat moored in Mill Meadows, is a qualified fitness instructor, which fuelled her interest in healthy living, and had wanted to open a whole foods shop for some time.

She looked at premises in Marlow, where she grew up, but couldn’t find anywhere suitable or where she could afford the rent.

She said: “Fortunately, when Daisy Boutique moved I was able to take on the shop without too many overheads. The rents are fractionally lower here.

“The challenge is getting people down to this side of town. It is a lovely area with a really eclectic, friendly community of small businesses.”

Mrs Tutill, a former air stewardess who has two grown-up sons, said her first year had been “steady”. She said: “Times are challenging for retailers and we’ve had some very quiet weeks but I’m inspired to keep going by the high interest in environmental issues, particularly after the BBC’s recent Planet Earth and Blue Planet documentaries.

“They’ve got people talking about the impact we have on our world and we had quite a surge of interest after Blue Planet was broadcast last year.

“I want to help people get into the habit of using their own containers. It makes sense financially because if you buy, for example, a small jar of herbs from the supermarket a big part of that cost goes on the jar.

“People can come here and buy in bulk, which is much better value.

“We all need to be more mindful of the cost of our actions. Living on my boat, I have a small generator and am about to install solar panels, so I’m always aware of how much power I’m using.

“There’s no more standing around in the shower for ages because I know how much it takes to heat and pump that water. I also think many people are giving more thought to what they’re putting into themselves.

“We all have our weak moments but generally we like to know that what we’re eating is wholesome and hasn’t been processed or had anything added just to make it stand out more on a supermarket shelf.”

Mrs Tutill, who lost her husband Paul in 2010, would like to host community events like walking clubs or workshops to promote recycling.

She said: “I’ve laid the groundwork and now want to get the word out about it. The community schemes wouldn’t necessarily be for a profit, it would just be a nice way of bringing people together.

“I’ve really enjoyed my first year and I’ve had some lovely feedback from my regular customers.

“I think my husband’s death taught me that life is too short not to take chances — if you’ve got an idea you’re really passionate about, you’ve just got to go for it.”