Dog owners groom their pets for glory at Crufts 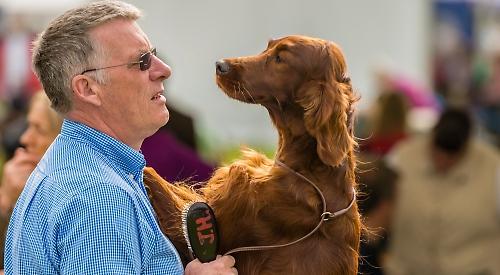 A COUPLE from Henley are hoping to crown their fourth champion at this year’s Crufts.

Julie and Paul Humphreys are taking their three Irish setters, Zoe, six, Abbi, nine, and 18-month-old Libby to the famous dog show, which is taking place in Birmingham until Sunday.

The couple, who have attended the show for the last 27 years, have previously bred three champions and have high hopes for Zoe in this year’s open championship class.

They had planned to take another of their setters, Carrie, but she died earlier this year.

Mrs Humphreys, who is retired, said: “I’ve shown and bred since 1983 and my first Crufts was in 1990. I go every year because it’s a big social event. It’s the highlight of the calendar as it’s the biggest show in the world and receives the most overseas visitors.”

The couple regularly compete at shows across the country and Abbi was named best bitch at Crufts in 2013.

Mrs Humphreys said: “I’ve had three champions with the potential for one more this year in Zoe. Our class is on the last day, which is the biggest day, so we are starting to trim up and cut nails.”

The  property developer, who moved to Britain from her native Russia in 1994, owns eight border collies, six of whom live with her.

She said: “I only started to have dogs when I moved to this area and I had more time. I’ve always been an animal lover and have had them since I was a child.

“My first border collie was Acia, who I got in 2001, and I took my dog Arnie to our first Crufts in 2007. It was a bit frightening and overwhelming in the beginning but breathtakingly exciting.

“I didn’t know much about it but after that I went every year either to watch or participate.”

Dr Shahmatova, who moved to Highmoor from London in 1997, has attended every Crufts for the last 10 years and won best puppy bitch in breed in 2014 with Amanda.

She said: “She’s a very beautiful dog but she’s in season this year. I don’t have any hopes of winning this time, I’m just going to show myself and my dogs.

“I go every year, usually to exhibit, and I’ve learned a great deal. I now know what I’m doing.

“I’m looking forward to this year’s show, I’ve started grooming them to make sure they look nice.”

Catherine and Gordon Urquhart, from Peppard Common, are taking seven of their dogs to the show. These are five Maltese named Watney, Sassy, Dee Dee, Diamond and Sweet Pea as well as two Papillons called Vogue and Patricia.

The dogs will be competing in various categories under alternative show names.

Mr and Mrs Urquhart regularly show their dogs at competitions around the world.

They used to run a stall at Crufts for 25 years selling goods from their canine and feline grooming business, HUB International.

However, this year they have decided to focus on competing.

Mrs Urquhart said: “I was a judge last year and we decided not to do a stand any more because it’s too hectic to judge and show as well. It’s like three shows in one.

“There are 66 dogs in the Maltese competition and the standard is extremely high — you can’t have a hair out of place. My last time under this judge was four years ago in Windsor and we got best puppy bitch, so she knows a good one when she sees one!”

Their class will be judged tomorrow (Saturday) but they are planning to spend an extra day at the show so they can go shopping as well.

Mrs Urquhart said: “The dogs are all being bathed this week so they can be trimmed and groomed to as near as perfect. Then they will have a full bathe before we go off on Friday lunchtime. A friend will be moving in while we are away to look after our other dogs and horses.”

Carolyn and Neil Boddington, of Shirburn Street, Watlington, will be entering two of their bearded collies in the show.

Odie, eight, previously won best in breed at the 2013 show and will be competing in the veterans category, while three-year-old Jag will be in the mid-limit class.

Mrs Boddington, a marketing consultant, said: “We’ve had Odie since he was a pup and he has done very well. He’s had lots of different accolades, including best in breed at Crufts. Jag was bred in Watlington by me.

“I’ve been competing at Crufts every year since 1990 and we’ve had a number of firsts and placings. We love it and really look forward to seeing all our friends.

“I love the show and the shopping, my shopping list is growing by the moment.

“I’m getting quite excited now but there’s a lot of prep for long-haired dogs!”

The dogs were bathed and groomed on Wednesday before the couple set off for the show the following morning.

Mrs Boddington said: “We just need to keep them clean. I’m hoping there won’t be any rain.

“It’s hard to know how we will do because at the end of the day it’s the judge’s decision. I hope he likes them and thinks we’ve done a good job.”