Players move back and forth in search of truth 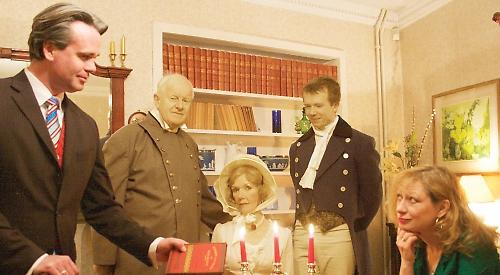 HAILED as Tom Stoppard’s greatest play, Arcadia dances back and forth across the centuries looking at relationships, love versus intellect, science and the disruptive influence of sex on what we know about life.

In this latest adaptation at the Kenton Theatre, the Henley Players stay true to the text with all the action taking place in a single room in a country house in Derbyshire as the characters in the present investigate the events played out by those in the past.

In 1809, Thomasina Coverly, the daughter of the house, is a teenager who studies mathematics, nature and physics well ahead of her time. Her tutor Septimus Hodge is a friend of the “mad, bad and dangerous to know” Lord Byron, as described by his lover Lady Caroline Lamb but, despite being a central character, he never appears.

In the present, writer Hannah Jarvis and literature professor Bernard Nightingale arrive at the house. She is investigating a hermit who once lived in the grounds while he is researching a duel of passion in the life of Byron that took place there.

As their studies unfold, with the help of Valentine Coverly, a post-graduate student in mathematical biology, the truth about what happened in Thomasina’s time is gradually revealed.

An ancient tortoise is the one constant character in both periods, appearing in every scene, symbolising long-suffering endurance and the continuity of existence.

The play’s set features a large table, used by the characters in both past and present and the props are not removed between time periods so you will find the likes of books alongside quill pens, coffee mugs and laptop computers.

Darrel Poulos, from Remenham, who chairs the Henley Players and is the show’s director, said: “It was voted the seventh best play out there, even better than some of the Shakespeare plays. It is very witty, funny and entertaining and in some ways educational.

“We are not changing anything because Stoppard’s words are just perfect — they are what make the play. His put-downs are better than anything that Oscar Wilde ever did. We are just focusing on getting the words perfect, with the right timing.

“The two time periods echo each other and repeat the same sort of themes of love interests and morals. It is about relationships and how people deal with each other. The interesting thing is it all takes place in the same dining room and it mirrors a scene that happens 200 years before.”

Mr Poulos, who has been a member of the Henley Players for about 20 years and has directed and acted in previous productions, says he is looking forward to performing it.

He said: “I feel very blessed — I have had some very good casts in other productions but this the best one I have ever had. They really understand the play and how it works in the theatre and I am sure the audience will be laughing.”

Arcadia will be performed by The Henley Players at the Kenton Theatre from March 21 to 24 at 7.30pm with a 2.30pm matinée on March 24.