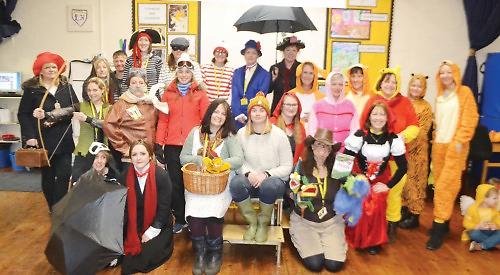 Pupils dressed as characters from Harry Potter, the Chronicles of Narnia, The Cat in the Hat, Paddington Bear and Mary Poppins as well as superheroes, pirates, fairies, crocodiles and sharks.

Head of English Alana Dickinson said: “The children are so enthusiastic and bursting with joy to read all the time.

“Reading for pleasure is the single most important factor in exam success.

“We did a fashion show because we wanted to display the costumes and for everyone to see each other.

“Their outfits were fantastic and the parents had worked so hard.

“We also did a special book swap where children brought in a book that they like but no longer want and were given a token which they could swap for another book.

“The older girls were reading with the younger ones right through the school.”

Pictured clockwise from left, all 200 children, The Cat in the Hat Archibald Thomas, the teachers and Zahra Sheikh as The Big Bang.