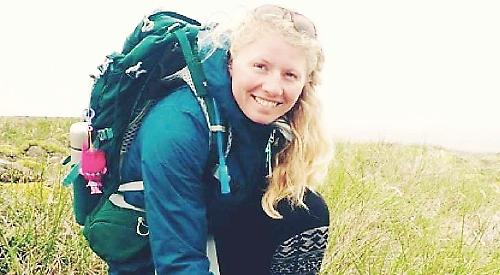 A FORMER Henley sea cadet has returned home after being seriously injured in an accident in the Falkland Islands.

Charlotte Bainbridge, from Moulsford, suffered five broken ribs, three broken fingers and a shattered shouder blade as well as as lung and liver damage when a shipping container she’d taken refuge in during a storm flipped over and rolled 200m.

She spent several weeks in intensive care recovering with her parents Dawn and Andy and boyfriend Edd Hewett at her bedside.

She was finally discharged on Tuesday last week and she and Edd arrived in the UK the following day following a successful fund-raising drive to pay for their flights.

Friends and family donated more than £5,500 so that Charlotte could fly business class. She needed a reduced level of painkillers in order to fly so a conventional seat would have been unbearable.

Charlotte, a former student at The Henley College, said: “Thank you so much everyone who donated. We’re completely overwhelmed with the love and support we’ve received.

“The other day I was crying my eyes out that we couldn’t afford to get home, now I only have tears of gratitude. Thank you so much.”

Charlotte and Edd had been camping at Cape Dolphin, a remote area in the north of the islands, when the accident happened.

Edd hiked about five miles to get help and a helicopter was scrambled.