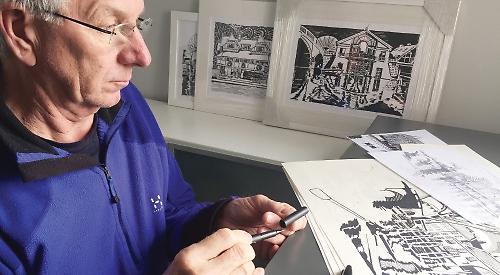 ARTIST Shaun Goffe admits the margin for error in producing his latest works is zero.

He is creating a set of prints of iconic scenes in Henley using black felt pen so that just one slip could ruin a picture.

So far he has managed to keep a steady head with his images of Hart Street, Leander Club, the Henley Royal Regatta headquarters and Henley Bridge.

“I got to know it very well and I really enjoy the town,” he says. “I used to go to Marsh Lock and then on to Shiplake and then in the other direction to the Flower Pot pub in Aston. I work from locations as obviously that’s quite important. I love to sketch motion and the only way to do that is by being there. I take a lot of reference photographs and do a lot of sketches and then lay it out and get the overall look of the thing.”

When he has enough information, he goes home to work on the piece and spends up to 15 hours on each one. Mr Goffe, who used to work in sales and marketing and software project management, adds: “I’ve always enjoyed drawing and doing artistic things.

“My real interest is in graphics and by that I mean the composition, font, margin and colour. I’ve paired it all back so now I’m just using black – it’s just me, a pen and a piece of paper.

“I was inspired to sketch Leander by seeing it under snow during the last snowfall when somebody put a beautiful photo on the club’s website.”

He hopes to sketch the town hall, Marsh Lock and Temple Island.

Mr Goffe says: “I’m getting into the swing of things but there’s still a lot more to do — something that people can relate to, that’s really interesting for them to look at and to have but presented in a new and fresh way.”