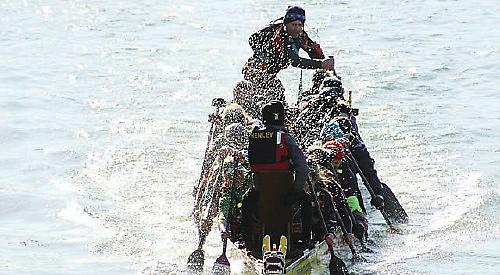 Henley welcomed paddlers from Wraysbury and Pershore to make up a composite team for the occasion as Rafters and Royal Outrigger Men started behind Henley in their pursuit up the 7.5km course.

On the downstream leg, Henley battled with the choppy conditions but were soon caught and passed by Rafters just before Upper Thames. Not deterred, Henley continued to paddle strongly towards Temple Island and maintained the distance between themselves and Secklow.

Henley were clear of competition from Temple Island up towards Phyllis Court where they overtook Thames Dragons, a 10-man dragon boat.

Henley called several bursts in the upstream leg of the race to narrow the gap between themselves and Secklow but they were not in contention to catch them. The final section of the course up to and around Rod Eyot and returning to the Eyot Centre was completed without drama but further seconds were lost to Secklow as Henley finished third overall in a time of 36 minute 55 seconds.

Henley finished third overall in the series with 37 points, just behind Royal Canoe Club Men’s (outrigger) with 40 points and winners Rafters with 49 points.