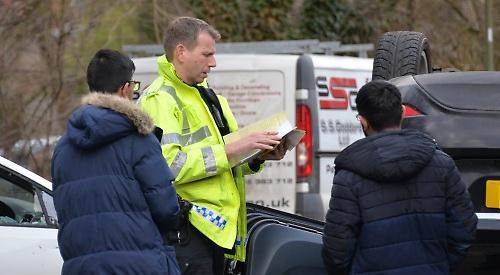 The Ford Fiesta collided with a Volkswagen Polo and a Volkswagen Golf parked in Deanfield Road, near The Henley College.

The black car ended up its roof in the middle of the street. The driver, believed to be a student, was heading towards the college when the incident happened at about 2.40pm on Tuesday.

No one was injured but all three cars were damaged.

The Fiesta’s windscreen was smashed and glass and debris was strewn across the road. Immediately after the crash, a number of teenagers crowded around the vehicles.

Police were called and closed a section of the road between Tilebarn Close and the roundabout on Deanfield Road for more than an hour while the cars were recovered. This led to queues on roads in the area as drivers were forced to turn round. Officers spoke to witnesses and the owners of the vehicles.

Deanfield Road and other streets in the area are used by students at the college to park.

In 2016 police left flyers on vehicles warning drivers against inconsiderate parking, speeding, noise, abusive language and anti-social behaviour. In a statement, the college said it was “very concerned” to hear about the accident.

It continued: “We are in the process of supporting those involved and are awaiting to hear the outcome of any investigation.

“We are already speaking to the local community about what measures we can put in place to help to minimise any potential risk in future.

“We communicate regularly with our students about safety and value our community partnerships, so looking at ways we can engage positively with local residents and the police to ensure road safety is our priority.”