Youth festival is off and running 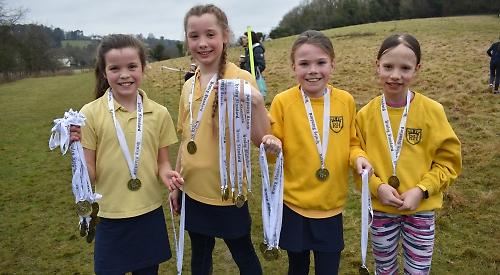 HUNDREDS of children took on a muddy and slippery cross-country run as this year’s Henley Youth Festival got underway.

The youngsters, who were all representing local schools, took part in the Go Kids Run at Swiss Farm on Saturday.

There were races for school years one to six and more than 140 children took part, down from about 185 last year.

They were warmed up by children’s entertainer Darren Hillier, also known as Bertie Slippers, before being set off and chasing after the “March hare” pacesetters: Freddie Unwin, Georgina Ashby, Tom Le Beau and Thomas Mennie.

The course, which includes a steep hill, had been left muddy by rain overnight and some children slipped over before bouncing back up to finish the race.

There were team trophies for the team winners as well as individual awards for runners who showed kindness, perseverance, reverence or spirit, while every finisher received a medal sponsored by Higgs Group, publisher of the Henley Standard.

Organiser Eileen Unwin said: “It was another great event with fantastic support from the local community.

“There was camaraderie, fun and smiles by the bucket load. It is always such a pleasure to see the children turn up and participate.

“Congratulations to all children involved and a special thank you to parents and teachers who gave up their morning to support the children as well as our hares.

“Thanks also go to Swiss Farm for the generous loan of their fields.”

Nine acts, including singers, guitarists and a saxophonist, performed to dozens of people at the venue.

Jodi Anderson, 14, who lives in Sonning Common, performed three of her own songs as well as a cover of Skinny Love by Birdy.

The Chiltern Edge School student has been singing since she was six and writing songs for the last two years.

Daisy Lynch, 12, of Middle Assendon, opened the show as she performed Piece by Piece by Kelly Clarkson.

James Grundy, 18, of St Andrew’s Road, Henley, was performing at the gig night for the second year in a row.

The Shiplake College student, who plays the guitar and sings, performed four songs including Let It Go by James Bay and Waiting for You, which he wrote himself.

Guests gathered inside the brewery to dance and cheer on the acts, while others sat on benches outside the venue with food and drink. Many took videos on their mobile phones during the performances.

The acts left the stage to applause and cheers, while many embraced their friends and family after performing.

The night ended with performances by bands Dolly and the Dinosaur, based in Reading, and Headspace, who played their own music.

Organiser Kerry Fretwell said: “It went really well and it’s nice that it’s bringing youngsters through because that’s what the festival is all about.

”Dolly and the Dinosaurs have a huge following of about 40 mums and dads and when those supporters turned up it was really busy. They were just brilliant and amazingly charismatic.

”It’s a very relaxed environment for starters and had a very supportive atmosphere. It’s a nice place for people to start off and cut their teeth.”

The 45 acts were split in to four concerts during the morning and included singers, pianists and even a bassoon player. They were watched by family and friends who sat on seats at the college’s Tithe Barn Theatre, while each act was introduced by compere Alfie Hay, the festival’s performing arts co-ordinator and gala organiser.

Many of the acts performed pieces of classical music by composers including Mozart, Beethoven and Tchaikovsky, but there were also renditions of pop songs by singers including Taylor Swift and Leo Sayer and a performance of the theme music from film series Pirates of the Caribbean.

There were also performances by youngsters from the Henley Music School, including its brass, cello, wind and violin ensembles. Many of the school’s members wore special T-shirts for the event with the message “Keep Calm and Play On”.

Founder Laura Reineke said: “The kids love it and it made a nice Mother’s Day treat.

“Everyone there performed well, they always do. We do it every year, it’s an event that is firmly in our calendar. It was lovely and then we performed again on Tuesday.”

The acts were all watched by special advisors Richard Curran, musical director at the college, and Kate Billimore, who directs two choirs in Oxfordshire. At the end of the concerts they gave feedback on the performers.

This year’s festival has a theme of “celebration” to mark its 25th anniversary.

There have been workshops this week including nightly performances at the Kenton Theatre in New Street and a senior proms event for classical, folk and jazz musicians in years seven to 13.

The festival is run by more than 60 volunteers and offers about 2,500 children in the area the opportunity to take part in sports and performing arts. It is one of the largest youth festivals in the UK.

Other upcoming events this weekend include a dance night at the Kenton Theatre from 7pm to 9.30pm on Friday, as well as the art and film exhibition at the River & Rowing Museum in Mill Meadows from 11am to 4.30pm on Saturday, which will continue on Sunday from 11am to 2.30pm.

Also on Saturday will be a young dancer exhibition at the Kenton Theatre from 1pm to 3pm before the same venue hosts a special gala night from 7pm to 9.30pm.

Open to all years, the event will celebrate the last 25 years of the festival and will see the return of past performers.

The festival will finish with prizegiving for the art and film exhibition at the River and Rowing Museum at 2.30pm on Sunday.

A full report, including interviews with performers, and pictures will appear in this week’s Henley Standard, which is out on Friday.

For more information about the festival, visit www.hyf.org.uk