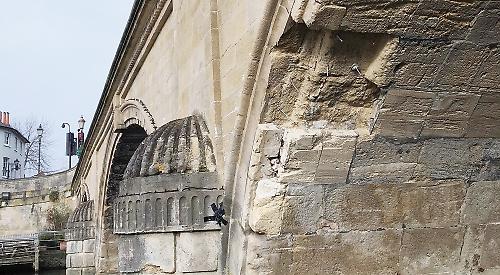 AN artist who attached lights to Henley Bridge without permission has criticised council bosses for failing to repair long-standing damage to its stonework.

Clive Hemsley has been ordered to remove the lights that he fixed to the historic crossing by Oxfordshire County Council, which is responsible for its upkeep.

But Mr Hemsley, of Hart Street, Henley, says the council should be more concerned about damage to the stonework where the Grade I listed bridge has been hit by passing boats.

Several large hamstone tiles are missing from the inside of the central arch, exposing the metal pins underneath, while the fluted stone cladding on a south-facing pier near the Henley Royal Regatta headquarters has been scraped off.

The first damage is believed to date back to 2016, when a 65ft Dutch barge named Skylark Song struck the crossing as it was travelling downstream. This was one of at least three collisions in six years.

Meanwhile, two columns are still missing from the bridge’s northern balustrade after it was hit by a lorry during last year’s Henley Royal Regatta. The hole is covered by two red plastic crash barriers tied together with rope.

The county council last carried out repairs to the bridge in 2011, a year after it was hit by a cruiser. This cost about £200,000.

Mr Hemsley said he had noticed the damage while attaching the two strings of 800 LED bulbs and this had concerned retired historian Robert Drayton, who advised him on the installation

Mr Hemsley said: “I’ve written to the county council asking a number of questions but haven’t had a reply yet. I think this is something Wokingham Borough Council and English Heritage need to be involved in as well.

“Our historian was embarrassed by it and said the damage should have been attended to a long time ago. We’re talking about big pieces of steel and nails jutting out as well as large areas of stone missing so I think we deserve answers.

“Henley is a ‘global brand’ and it really isn’t excusable for the bridge to be in this state. I’d argue my lights make it less likely for this to happen in future as the last collision happened at dusk, when it’s harder to see where you’re going.”

Mr Hemsley says he can’t remove the lights, which are secured with putty and electrical tape, for several weeks as the river is now flowing too high and fast to carry out the work safely.

He could also face action from South Oxfordshire District Council, the planning authority, which is investigating whether the lights constitute unlawful development on a listed building.

Mr Hemsley says consent is not needed as the lights are not a permanent fixture.

He said: “A barrister friend of mine said that you can put up a structure for 28 days without needing permission. It’s a temporary structure as you can easily remove the putty with a spray.

“The lights are not an eyesore as you can hardly see them in the day and they look amazing at night. We should be promoting our historic architecture, not destroying it.”

More than 1,800 people have now signed a petition urging the authority to let the lights remain.

Henley Mayor Kellie Hinton, who is among the signatories, has said it would be an “absolute travesty” if they were removed without the stonework being repaired.

The county council has discussed the issue with Mr Hemsley and says it would happily consider permitting a lighting trial but only under its supervision and with the formal consent of the town and district councils.

A spokesman said the repair works were in the pipeline and had planning permission but a traffic management plan was needed for the repairers to work in safety. This could include the closure of at least one lane on the bridge.

The repair also had to be done using a lime mortar because of the bridge’s historic status and this couldn’t be used below 5C.

He said: “There is no link between accidental damage caused by vehicles and installing lights on a listed structure without consent.

“Henley Bridge is a Grade I listed structure and clearly any such installation would require not only our permission but also listed building consent from the district council. We did not give permission.”