Bar and restaurant re-opens after rebrand 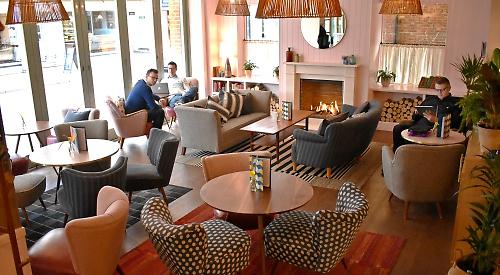 A NEW branch of Coppa Club has opened in Henley.

The former Strada restaurant in Bell Street has undergone a £1 million refurbishment to become the fifth branch of the bar and restaurant chain, which was launched at the Great House in Sonning in 2014.

An internal wall has been knocked down to create a large, open-plan dining area along with some more casual café seating, a log fire, sofas and a bookshelf.

The kitchen has been opened up so diners can see meals being prepared. The outside frontage and fascia board have been painted sage green and a large clock has been fitted to the front of the building as part of the rebrand. The restaurant also has permission for seating and tables outside.

The branch is managed by Jonny Bramwell, 30, of Upton Close, Henley, who also manages the Sonning branch. He was previously manager at Côte in Windsor and Bel and the Dragon at Cookham.

The restaurant has nine kitchen staff, 15 waiting staff and a management team of three. Mr Bramwell said: “It’s quite exciting to manage this as it’s in my home town and I think it looks amazing.

“It will be great for people to have somewhere to go that ticks all the boxes, whether you want to sit with a newspaper and a coffee during the day or food and cocktails in the evening. That variety is really important.”

The other three Coppa Club branches are in central London and there are plans for a sixth in Maidenhead. The brand is owned by Strada Trading.