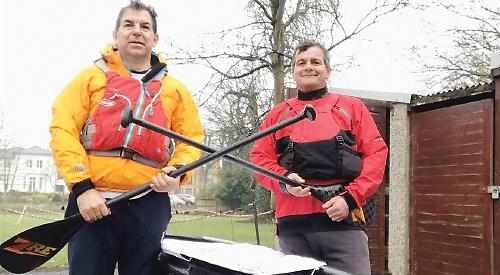 A MAN from Henley is to make his second attempt at paddling 125 miles across Britain in a canoe for charity.

Chris Bishop will set off from Devizes in Wiltshire next Friday with the aim of reaching Westminster Bridge on Easter Monday.

He hopes to raise at least £10,000, half of which will go to Alzheimer’s Research UK in memory of his late father Derek, a retired firefighter who was diagnosed with early onset dementia in 2007 and died in 2014, aged 77. The rest will go to Multiple Sclerosis UK.

Mr Bishop, 52, a business development manager who lives in Queen Close with his wife Debbie, first attempted the feat as part of the Devizes to Westminster International Canoe Race in 2016 but had to stop at Hurley Lock due to extreme cold and winds.

He and his paddling partner Alan Bannatyne, from Bourne End, gave up after they almost capsized but still managed to raise £8,700 for the charity.

Now Mr Bishop is having another go with his friend Paul Reynolds, a 54-year-old IT consultant, from Skirmett, who lost his father Peter to Alzheimer’s in 2015.

The pair, who will be among hundreds of teams taking part in the 70th annual race, will compete as Team Forget-Me-Not and have chosen the kingfisher as their logo because it was Mr Bishop Snr’s favourite bird.

They will first travel 35 miles from Devizes to Newbury, where they will stay overnight before going another 35 miles to Marlow using the Kennet and Avon canal to Reading and then joining the River Thames, passing though Henley at about 11am.

On the Sunday they will paddle 39 miles to Teddington and then get up at 4.45am on the Monday in order to pass along the Tideway while the tide is heading out.

They expect to cross the finish line by 9am.

They will be accompanied by two support vehicles carrying first aid kit and extra clothes.

Mr Bishop and Mr Reynolds have been training since last summer with the support of Henley Canoe Club.

Their canoe, The Darkness Duet, which cost £2,000 and is sponsored by the Frog pub in Skirmett, weighs about 19kg with safety equipment and they will have to get out and carry it through 77 locks. After the challenge they will donate the canoe to the club.

Mr Bishop said: “The new boat is very different from the last one as it’s very stable and quick, although it’s like steering an oil tanker. You have to know well in advance what direction you want to go in.

“For safety reasons we have to finish each leg in eight-and-a-half hours, which we’re confident we can do. The challenge will be finding a gym with a sauna or steam room as we can’t afford to be sore or stiff the following morning.

“We will be paddling for six or seven hours without a break but it’s better than last time, when we were aiming to do it in 28 hours and were paddling non-stop through some very dangerous conditions. I’m so glad the bad weather hit us in the earlier part of this month!

“I’ve learned a lot about canoeing since last time and feel reasonably confident. Obviously we can’t control the weather but at least we can rest at the end of each day, no matter how bad it gets. We’ve also managed to avoid any injuries during training so we’re about as prepared as we can be.”

The men will burn about 500 calories an hour so will keep their energy levels up with foods high in carbohydrates like bananas as well as special drinks. Mr Reynolds, who has previously climbed to Base Camp on Mount Everest, said: “I’m feeling pretty happy about our prospects, although we’re going to have to get our diet right to ensure we have enough energy to get to the end.

“It’s an unusual way to spend your Easter weekend but I’m looking forward to reaching the finish and am really pleased with the support we’ve received.”

To sponsor the team, visit www.forgetmenot.events

• Several Henley businesses have collection boxes, including the Three Tuns, the Angel on the Bridge and the Anchor, Café Rouge, Cannelle Beauté, Pachangas, the Chocolate Café, Patisserie Franco-Belge and Gabriel Machin.