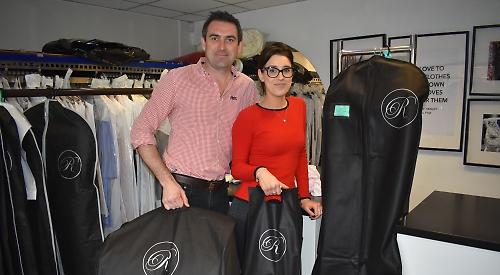 THE owner of a Henley dry cleaning business is aiming to eradicate plastic waste from his company.

Ian Reid, who runs Reids of Henley in Reading Road, says he wants to stop using disposable plastic covers on suits and other clothes cleaned at the business after becoming concerned about the effect waste plastic was having on the planet.

The business, which has a sister shop in Marlow, cleans around 2,000 garments every week and they are usually returned to customers in plastic covers, which are then usually thrown away and end up in landfill.

Mr Reid has now introduced reusable covers made from a woven fabric, which customers can bring back each time they visit the shop. He is currently running a two-month trial with 20 volunteers and, if this successful, plans to roll it out to all his customers in May.

Mr Reid said: “The dry cleaning industry is a long way behind other retailers.

“There just isn’t biodegradable plastic available at the moment so we want to change to reusable packaging.

“These covers are 100 per cent recyclable and we are hoping people will re-use them.

“We are trialling it with people to see how it works and how durable the covers are. Will the customers remember to bring them back?”

The covers, which have been made by Mr Reid’s current suppliers, come in different shapes and sizes to accommodate all types of clothing as well as curtains and even duvets.

He admits they are more expensive to buy than the usual plastic covers but could actually save him money in the long term.

Mr Reid said: “If people re-use them we make a small saving in plastic each time but it’s a big outlay for us to bring them in.

“We need to work out the cost and logistics because we are trying not to pass on any additional costs to our customers.”

Mr Reid says the reusable covers are harder to manage than plastic ones as his staff will have to remember which laundry goes with which bag.

He said: “Most people who reuse their suit covers want their garment returned in the same cover. You can’t mix them up.” He says he was inspired by schemes in Henley to reduce plastic waste, including Refill Henley in which businesses allow visitors to refill their water bottles free rather than buying new ones.

The scheme was launched in October by town councillor Sarah Miller and anti-plastic campaigner Julia Carey.

Mrs Carey is also running a campaign to persuade the town’s main two supermarkets to introduce a plastic-free aisle for fresh produce such as fruit and vegetables so shoppers can take it away in their own bags or baskets.

Mr Reid said: “It’s just wrong to fill the planet with non-recyclable plastic so you’ve got to start somewhere.

“It’s what the customers want and we are in the service industry so we will supply it.

“The supermarkets did it with plastic bags and now you feel bad asking for a bag because it’s wrong.” Mr Reid says his company, which has been in Henley for 25 years, has always tried to be environmentally friendly and recently introduced more energy- efficient machinery.

He said: “We’ve spent £150,000 this year on new equipment and our washing machines use the minimum amount of water and recycle the water we do use.

“Water is used in the chilling process and then goes back in to the tanks. Every cubic metre of water is used twice.