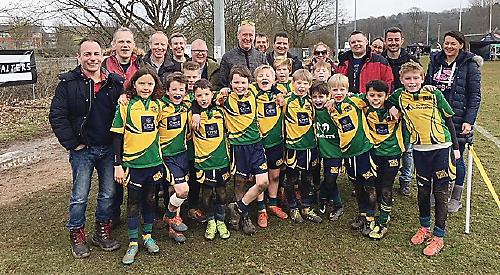 The under-11s “Reds” combined incisive attacking play with fearless tackling and speed at the breakdown to produce excellent results against very strong sides from Windsor, Pontyclun, who were on tour from Wales, Camelot and Rosslyn Park.

Sam Winters, Will Corbett and Charlie Hunt linked well throughout to score 10 tries between them.

Ollie Goforth, Dougie Amlot and Alfie Malcom were fearless in both attack and defence, Ben Horner and Zac White controlled the game well at half-back and Hunter Rey, Conor Quinn and Charlie Baker produced their best rugby to date.

A highlight was the referee commending the Henley players for their excellent sportsmanship following a typically hard fought and competitive game.

They demonstrated excellent fitness and adventure, especially in the final game of the day against Maidenhead.

The under-10s entered two sides into the competition, the Vultures and the Hawks.

The Vultures put on several spirited displays which culminated in a final game against their bogey team from Windsor.

Despite going 3-0 down at half-time, the Vultures rallied and set about picking apart a well organised defence with a combination of hard counter rucking and precise passing to move the ball wide and score quickly.

Henley grew in confidence and held possession and picked up a second try after finding space in a corner. Then, with time running out, the Vultures burst through the Windsor defence to score a third try just before the final whistle to claim a draw.

James Mennie, Rory Cordingly and Charlotte and Edward Tong worked tirelessly throughout the tournament, often putting their bodies on the line to ensure Henley Vultures won those 50:50 balls.

Crisp, accurate passing from Felix Baker and Lucas Edwards and incisive running from Jack Renders and Noah Mercer made the team difficult to defend against and led to many scoring opportunities.

With such a large squad, and only playing eight-a-side, a strict rotation system was used ensuring maximum game time for each player while providing continuity within a game.

The team scored 16 tries and conceded 11 and registered three wins and two defeats, one of which was lost in the last second of the match.

Some outstanding tries were scored by Will Masterson, Alex Clark and Jack Bradbury while Charlie Rees, Ollie Butler and Will Tavinor all put in some good tackling to secure the victories.

Four teams were entered by the under-8s and from their 20 games they returned 16 wins, two draws and two defeats.

The “white” team managed to go unbeaten across their five games, while the “red”, “yellow” and “black” teams had saw some very close games. The under-eights now enter their last few weeks of playing tag rugby, before starting contact next season, and will be heading on tour to Norfolk after Easter.