Hawks forced to settle for share of the spoils 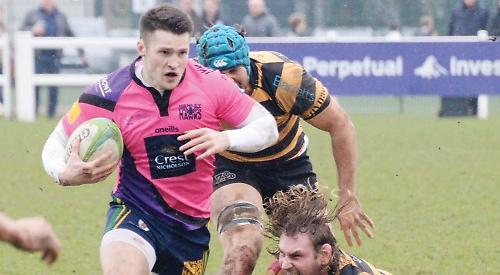 The lead changed hands on six occasions, but both teams, especially the hosts, will rue some missed opportunities that could have given them victory.

The Hawks started as brightly as the pink shirts they were wearing to mark the club’s support of Cancer Research UK, and Jack Robinson went close to scoring early on.

There was good endeavour from both teams and it was Canterbury who opened the scoring after six minutes with a well worked try from winger Jonathan Murray following a break from centre Frank Morgan.

Henley tried to play at a fast tempo and Connor Hayhow and Alan Awcock were a constant threat but it was George Jackson who was orchestrating things well for the Hawks.

A drive by Brad Cook allowed Jackson to make a searing break and then give Jack Robinson the scoring touchdown in the corner. Jackson converted the try from the touchline.

Jackson and Robinson combined well again shortly afterwards and a try looked a certainty but Canterbury wing forward Seb Clark had other ideas and saved his side with a try-saving tackle.

Another good move from Henley put Robinson clear and he combined well with Awcock and Jackson. The attack was rewarded with a penalty, which Jackson converted to give the Hawks a 10-5 lead.

Canterbury played with spirit and began to get back in the game, mostly from Hawks errors.

When a Henley attack broke down, the men from Kent countered and almost scored but Awcock was on hand to rescue the situation for the Hawks.

From the resulting five metre scrum, the ball was moved wide to Harry Sayers to touch down for the visitors and level the scores.

Canterbury were gaining momentum and they turned down an easy three points and kicked a penalty into the corner. From the resulting line-out, No 8 Jake Rigby finished off a driving maul to put the visitors back in front.

Just as it looked as if Canterbury would take control of the game, back came the Hawks to take a slender lead into the break.

A good drive from Dave Clements set up a backs move and Hayhow showed some individual brilliance with a superb break to outpace and then side-step the Canterbury defence to score. Jackson again converted giving the Hawks a half-time lead of 17-15.

The second half continued in similar style to the first with Henley trying to play at pace and, although the set piece was working well, started to make more unforced errors in their search for tries. In contrast, Canterbury were clinical and looked to capitalise on the home side’s mistakes.

After some even exchanges, Canterbury retook the lead. Another promising Henley attack faulted when a simple pass was spilled in the midfield and Canterbury’s wing Harry Sayers pounced and raced 40m to touch down for his second try and regain the lead.

A good Henley move involving Awcock, Sam Portland and Max Berry pressurised the Canterbury defence to give away a penalty which Jackson again converted to level the scores at 20-20.

The Hawks then failed to collect the restart and gave Tom Best an opportunity to kick his first points for the visitors and regain the lead once again.

The spirit is good in the Hawks squad and back they came with intent and a good break from Liam O’Neill set up the chance for Berry to score in the corner. Jackson again converted from the touchline.

Canterbury weren’t finished either and, despite missing five kicks at goal, could still sense a victory when Henley’s Dave Hyde received a yellow card. Their decision to play for a line-out was vindicated with a try for Jarvis Otto from a driving maul which Best converted from the touchline to give the visitors a three-point lead going into the final five minutes.

Another good break from Henley’s Hayhow won a penalty and Jackson then levelled the scores before a frantic final few minutes.

A great tackle from Xavier Andre stopped a Canterbury move but the Hawks failed to keep the ball and the visitors were awarded a penalty within kickable range to win the match. Fortunately for the Hawks, the kick drifted wide and game finished in an honourable draw.

The players swapped their usual green and gold shirts for pink to show their support for the charity and also former fly-half, James Comben, who is undergoing treatment for cancer.

The 29-year-old was diagnosed in February last year, was given the all-clear nine months later, but it returned in December.