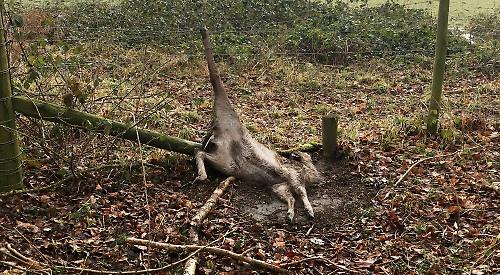 CAMPAIGNERS are calling for the removal of barbed wire fencing at a National Trust property near Henley.

Brian MacShane and Judy Dinsdale, of Northfield End, Henley, were horrified when a deer died after being trapped in the double-strand wire at Greys Court.

They are calling for the removal of the fencing and Ms Dinsdale plans to complain to the trust’s president, the Prince of Wales.

Mr MacShane discovered the dead animal only a few feet from a gate connecting Broadplat Woods with the Greys Court paddocks earlier this month.

He said: “With no apparent way through, (it) could only jump over the barbed wire, getting tangled up in it. It would have taken days for its last breath to leave its body.

“This is not the first time wildlife has been caught in the fence.

“Surely the National Trust, which champions the environment and the protection of wildlife, should use its own properties as a starting point? All around the estate the National Trust has insisted on double-strand barbed wire, protecting it from an imaginary enemy that appears to be both wildlife and people.

“The use of double-strand barbed wire is hostile and unnecessary anywhere. Should there be a national campaign for all National Trust properties to be barbed wire-free by 2020?”

The barbed wire has also been installed at the bluebell woods at Greys Court, which are popular with visitors.

Mr MacShane said the trust had created an “impenetrable fortress” for both people and deer by using the wire. Ms Dinsdale said she had been a member of the trust for about 50 years but had left a year ago over the installation of the wire at the bluebell woods.

She said: “It used to be very natural, very casual and very, very lovely. Now you go in one end and out the other and, of course, nothing could get in.

“I wrote to them about this and said, ‘what on earth are you thinking about?’ but they were not interested.

“I did point out, and this is why I resigned, that it was cruel and unnecessary and that wildlife would be injured.

“Fast forward to this year and Brian goes into the wood and comes back and says, ‘I’ve seen the most awful sight’.

“The National Trust says it wants to encourage wildlife and woodland life but at the same time they are installing barbed wire — it’s a contradiction.

“I don’t know how you can defend it when you see that picture of the deer. It must have died in such agony and for so long.

“I want to see double strand barbed wire removed from all National Trust properties. The trust is rich enough to remove it and put up an alternative.” A spokeswoman for the National Trust said: “Any intervention in the estate at Greys Court is very carefully considered by our outdoor team.

“The National Trust is a conservation charity with the protection and preservation of a healthy, beautiful, natural environment at its heart.

“The paddocks surrounding Greys Court are grazed by tenant farmers who use stock fencing to contain cattle.

“Cattle require barbed wire or electrified fencing to deter them from leaning on a fence and damaging or destroying it.

“The overpopulation of deer is an increasing problem in the Chilterns as they like to eat ground flora and the shoots of young trees.

“This can interfere with the natural succession of new growth necessary for a healthy woodland, which has a knock-on effect for the wood’s ecosystem and all the wildlife which lives there.”