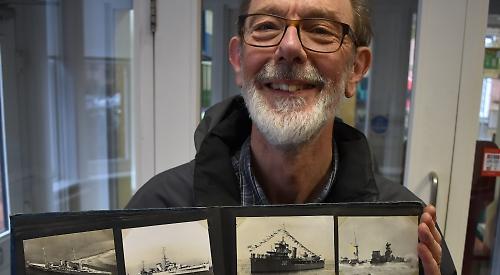 PAUL CLAYDEN is hoping to shed some light on a rather unusual discovery made at Holy Trinity churchyard in Henley.

Paul, who is a member of the congregation, was helping to clear the yard when he discovered a scrapbook filled with pictures of Second World War warships.

It was in an old galvanised water tank but, luckily, had escaped serious damage.

Paul, who lives in nearby Church Street, believes the scrapbook was compiled in 1938 and is hoping to reunite it with its rightful owner or their descendants.

All the photos of the ships have their names beneath.

“They are all British warships,” says Paul. “Where the photos were taken, I don’t know. I think the scrapbook must have belonged to someone who served in the navy.

“I was amazed to find it. It’s really quite exciting that something like this has survived so long having been so lovingly put together.”