I’ll mend the potholes myself 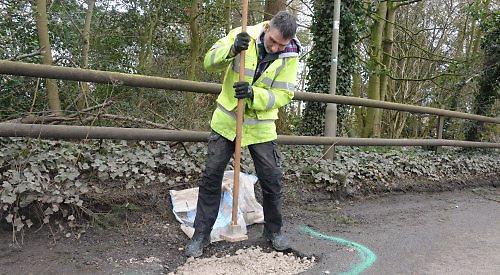 A TOWN councillor has started fixing potholes in Henley himself after becoming fed up with the state of the roads.

David Eggleton bought bags of aggregate to fill the holes before using a blowtorch to melt Tarmac over the top.

He did this in Gillotts Lane and on the Gainsborough estate in Henley.

He said many potholes had been properly reported to Oxfordshire County Council, the highways authority, via the Fix My Street website but no action was taken.

Councillor Eggleton, who lives in Gainsborough Road, said: “This year has been particularly bad for really deep potholes but they don’t need to get into such as a state that they need to dig up half a road to fix one.

“A lot of these potholes have been reported. They come out and put a little line around it but two weeks later it’s still there.

“We don’t want this extra expense of having to fix our cars. It’s all the inconvenience of it, such as taking time off work. A lot of people are coming to me and saying, ‘can you something about this?’ People are assuming it’s the town council’s responsibility and they keep referring to council tax.

“We all pay more and more in council tax and in road tax but we don’t get anything more — we should have spectacular roads.

“My aim is to make a point that someone has to make a stand. If I can prevent an accident or someone doing damage to their vehicle then I’ve achieved something.”

Councillor Stefan Gawrysiak, Henley’s representative on the county council, said: “I realise that Dave was frustrated by the time it took to repair the Gillotts Lane pothole and undoubtedly his positive action has saved motorists from further damage to their cars. However, we do have to be careful in repairing them ourselves because there are insurance and health and safety issues.”

In November, Cllr Gawrysiak revealed how he had checked every road in the town to identify road defects such as potholes, loose granite sets, overgrown vegetation and drainage problems.

He then posted them on an online map of Henley and reported them to the council so they could be scheduled for repair.

Cllr Gawrysiak said: “This week I am going to tour Henley again and log major potholes, drains and major repairs needed. I will continue to put pressure on the council and the Government for meaningful action on the poor state of our roads.

“I am currently working on a plan to spend my £15,000 councillor’s grant on pothole and road repairs. I realise that this is a priority for Henley residents.

“I would urge people to use Fix My Street to log further repairs because Oxfordshire officers are doing a great job in getting to the potholes logged with a view to repairing them within 20 days.”

This week, the Government announced that it is to provide another £100million in funding to help repair roads affected by the recent bad weather. Oxfordshire’s allocation amounts to £1,831,494.

Henley MP John Howell said: “This funding is welcome news for families and businesses in the constituency. I’ve been campaigning for a long time for greater investment in road repairs and I’m encouraging the council to make full use of its allocation locally.”

Last week, Kevin Bulmer, who represents Goring on the county council, said that road surfaces were deteriorating faster than defects could be repaired.