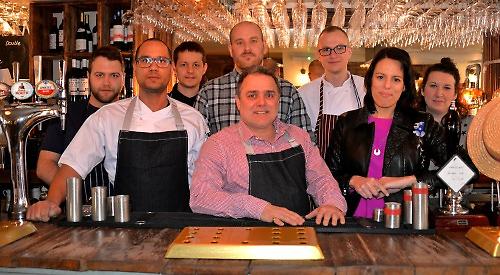 THE new landlords of a Henley pub have re-opened their kitchen following refurbishment.

Tim Wilson and Jayne Faulkes, who took charge of Station House in Market Place in January, are now serving “Austro-Bavarian food with a Californian twist”. About three-quarters of the dishes are gluten-free. They have also expanded the drinks menu.

Mr Wilson, 45, and Miss Faulkes, 36, who also run the Ship in Marlow, have redecorated and put in new furniture.

Mr Wilson said: “We’ve been interested in running a pub in Henley for many years and looked at various properties but none was suitable.

“We were looking for somewhere we could adapt to include a function area and restaurant. When we looked around the Station House in November, we felt it had the space and would be up to the job with a bit of work. We’ve kept the bar open while we spruced the place up and the feedback has been great since the kitchen opened.”

The premises were once home to Henley police station before opening as the Henley Brew House in 2013. Brakspear took over the following year.