Artist happy as mural is found after 40 years 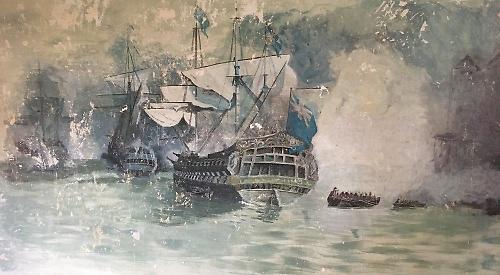 THIS mural must count as one of the more unusual discoveries made when houses are cleared ready for the next occupants.

The painting, which covers the
entire wall of the living room at a house in Gainsborough Hill, Henley, is about 40 years old.

It was discovered by house clearance contractor David Eggleton and staff from Soha Housing when preparing the property for its next tenant.

It was painted in the late Seventies by Geoffrey Roberts, who was then in his mid-twenties and living at the house with his parents.

Now 65 and living in Lewknor, he never expected to see his artwork again, believing it must have been painted over by the tenants who followed his parents.

However, his brother Martyn contacted him after Mr Eggleton posted a picture of the wall on Facebook.

Mr Roberts said he was delighted to see his mural again and his only regret was that his father William, who died in 2014, wasn’t around to see it too.

“It was a bit strange seeing it again, to be honest.” he said. “I assumed it had gone years ago.

“I’m just amazed that when my parents moved out the new residents didn’t just paint over it.

“Soha have been very good as they were due to plaster over it and they have deferred that for a week.

“They have offered to let us go back so I might take my mum down and have a look.

“Soha are looking into the possibility of putting plaster board over the front to preserve it.”

His mother, Jean, 89, who now lives in The Close, Henley, remembers her son creating the piece.

“It came from a Dutch painting that my husband had and he said to Geoffrey ‘it would look lovely as a mural on a wall’ and Geoffrey decided he would do it for his father. It took him just over a year. His father was a decorator and the only paints he used were his father’s decorating paints.

“Originally the front of the galleon was gold but that has worn off over the years.

“When David rang and said they’d stripped the wall and found it underneath I was amazed because I’d forgotten about it to be quite honest.”

Mr Eggleton, who lives on the Gainsborough estate, said: “I was clearing the contents of the property and I couldn’t see any of the picture because it was covered in wallpaper.

“I went back about two weeks later to pick up some more stuff from the garden and Soha were stripping the wallpaper off and I saw this nice painting.

“I put the picture on Facebook and even people from Australia were liking it. Lots of people have said, ‘wow, it’s fantastic’.

“I love it as it’s a bit unusual. It looks like something from Pirates of the Caribbean!

“Ideally, if they can cover it up with wallpaper it’ll still be there.”