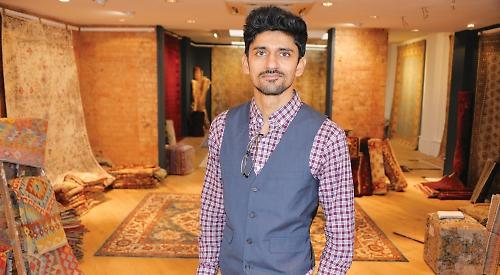 A SHOP selling handmade rugs has opened in Henley.

The Rug Shed is run by Usman Afzal, who has taken a five-year lease on the former Central Home premises in Reading Road. The homeware shop closed last month.

Mr Afzal, 30, from Northolt, plans to hold an official launch on April 15 but is already selling rugs from Iran, Pakistan, Afghanistan and Nepal.

All the rugs are made from wool and some have elements of silk.

He said: “The majority are handmade, hand-spun and hand-dyed.”

Mr Afzal has been working in the handmade rug industry for 10 years, first as an accountant and then importing rugs for suppliers in London and arranging trade shows in cities including London, Paris and New York.

He said: “With all these contacts, I thought it was time to go on my own.

“I’ve loved rugs ever since I got into the industry. I love picking a rug and knowing there’s not another one like it — it’s that uniqueness.”

He said he used to have a client in Henley about eight years ago so had been to the town before.

“It’s a beautiful little town,” said Mr Afzal. “The biggest benefit is it’s very close to London, where I have a warehouse.”

Hannah Ward opened Central Home in April 2015 but decided to enact a break clause in her five-year lease, blaming a decrease in footfall. The unit was previously the Deep Clothing store.