Have you bright idea for bridge? 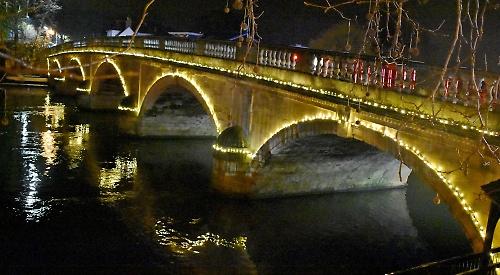 IDEAS are being sought for alternative ways to illuminate Henley Bridge after hundreds of lights were attached to it without consent.

Artist Clive Hemsley attached two strings of 800 white LED bulbs to both sides of the Grade I listed crossing.

Mr Hemsley, of Hart Street, Henley, has been ordered to remove them by Oxfordshire County Council, which is responsible for the 18th-century structure.

South Oxfordshire District Council says he didn’t have planning permission and warned it could prosecute him if the work is found to have damaged the historic Ham stone.

Now Henley Town Council says other methods of illuminating the bridge should be considered after hundreds of residents and visitors backed Mr Hemsley.

Deputy Mayor Lorraine Hillier told a meeting of the council’s town and
community committee on Tuesday that ideas were needed for the next meeting.

“We want as many people as possible to come,” she said. “We have a very special bridge and we have a very softly lit church. We’re looking at what is best for Henley.

“The main thing now is how to remove the lights without damaging the bridge and then we’ll look at the next stage.

“Of course, if a planning application was put forward there would be an opportunity for all residents to have their input.”

Councillor Sam Evans said: “There is a huge amount of strong feeling about illuminating the bridge.

“Can we get an initial plan or some initial ideas for the next meeting and encourage as many people who have expressed their opinion to come along?

“We have got to respond and do the right thing. What else has been done in other parts of the country?”

Mr Hemsley says he cannot remove the lights until the flow of the river is reduced so it is safe to do so. He says they aren’t doing any damage as he tested the adhesive before he put them up.

Almost 2,400 people have now signed an online petition calling for the lights to stay.

The county council says it would welcome a lighting trial in principle but would need to supervise the process and have the support of the district and town councils.