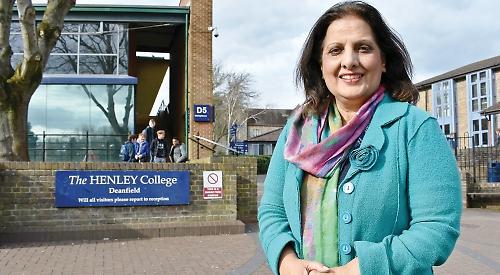 THE principal says The Henley College has a bright future despite its financial difficulties.

Satwant Deol, who has been in post since December 2016, says the college is on course to wipe out its £1.5million deficit by 2020 while making improvements designed to better equip the students for the modern workplace.

As the Henley Standard revealed last month, staff have received letters warning that up to 66 jobs are at risk of redundancy while courses could be cut in a bid to address the problem.

But Mrs Deol says the actual number of posts to be axed will be far lower, possibly a dozen or even fewer, while efforts are being made to save the small number of threatened subjects.

The cuts are part of a two-year “early intervention strategy” overseen by the Government’s Education and Skills Funding Agency and will not affect the college’s plans for a new £3million science, technology, engineering and mathematics (STEM) hub at its campus in Deanfield Avenue, which is due to open by 2021.

Mrs Deol says the college  has already secured a pledge of £1 million from an organisation which doesn’t want to be identified at this stage and is in talks with two others about similar donations.

With even more money the centre could be bigger than envisioned and the college could also build halls of residence in order to accommodate up to 60 international students.

Mrs Deol, who was previously managing director for education and skills at Highbury College in Portsmouth, learned a year ago that the college was running a deficit.

This was anticipated but was larger than expected due to a shortfall in government funding carried over from the previous year — the funding for students aged 16 to 19 has dropped from about £5,000 a year four years ago to £4,200.

At the same time, the college has faced increasing costs in areas such as pay rises, including the “harmonisation” of salaries and terms of employment, and bigger pension contributions.

Furthermore, even though 60 per cent of its 2,400 students come from Buckinghamshire or Berkshire, it does not get the outer London weighting awarded to colleges in those counties.

If it did, it would be £500,000 a year better off, says Mrs Deol, and wouldn’t have a deficit. She insists the college is doing everything it can to cut costs without affecting the quality of teaching.

It will not merge with other institutions but is sharing services where possible. For example, it now designs new courses in partnership with Abingdon and Witney College.

Most of the redundancies should be voluntary while most savings will be made by reducing the amount of time that teachers spend in individual tutorials and increasing their classroom hours. Some middle management roles could also be reassigned to include a few hours of teaching.

Only three of the college’s 36
A-level subjects are classed as “vulnerable” — German, music and music technology. This is because of the small class sizes, which mean the college receives less funding.

The college has had talks with the Goethe Institute, the educational arm of the German embassy, about ways to keep the German course going, which could include making the college a “hub” for the language in Oxfordshire through online learning.

Mrs Deol says: “The breadth of A-level provision is one of our key strengths and we don’t want to sacrifice that as it’s one of the main reasons people come here.

“We’re an aspirational college — many students bypass their own towns’ colleges to come here because only we offer the subjects they’re interested in.

“However, we have a handful of courses with very small numbers like German and we’ve had to consider the viability of those.

“There are tremendous problems recruiting music students, for example. It used to be a big part of primary and secondary education but if pupils aren’t taught early they don’t develop an interest later in life. It’s heartbreaking but there are limits to what we can do about that.

“The Government’s agenda is centred largely around STEM, which is tremendously important but you still need creativity and the current approach is killing that.

“A slight increase in class sizes
would bring in the required funding without making much difference from a student perspective.

“It’s a difficult time but it’s not unusual for a college like ours in the current climate and many are in a similar position. Twelve per cent of funding for 16- to 19-year-olds has been removed from the system in the past four years and there’s less money for services like mental health support. Costs have gone up at the same time so it has created a perfect storm.

“Our consultation on the redundancies only ended recently so any proposals are yet to be finalised. However, by redirecting resources towards the classroom we will create more teaching time from the existing staff and students should actually see a better service.

“The majority of staff are likely to be retained in some form. At the end of the day, a small number of individuals are at risk but it’s nothing in the order of 66 as that would represent about a quarter of our teachers.

“We need to be more efficient but will do this responsibly while protecting learning as much as we can.”

Mrs Deol says she supports the Sixth Form Colleges Association’s campaign to improve funding for the sector, which receives only about 83 per cent of the amount allocated to secondary schools, and recently went with Henley MP John Howell to discuss the situation with education ministers.

She is working with Henley town councillor and former mayor Julian Brookes to raise £40,000 for a temporary STEM centre which will open in a converted classroom at the Deanfield site in September. The rest of the £200,000 needed will come from the college’s reserves.

The centre will have a “mechatronics” laboratory with equipment to enable BTEC electrical and mechanical engineering students to study a wider variety of modules. For example, it will have an AutoCAD studio, which produces technical drawings and three-dimensional models using computer software.

Architects have drawn up plans for the new centre and public consultation will be held in the spring before a planning application is submitted to South Oxfordshire District Council.

The centre will offer new courses on subjects such as computer security, robotics, computer games and virtual reality as well as more creative pursuits like graphic design and product design.

These skills were the most in demand across London and the Thames Valley according to research the college conducted with employers including Culham Science Park and Brunel University. The latter could set up a “micro site” at the new centre which would focus on sustainable energy and renewable technologies. The college could sell some of its land to raise money but would prefer to meet the cost through partnerships. Any land sold would go to causes benefiting the community.

Mrs Deol says: “The development of STEM provision is very healthy for us and the finished centre will make a real statement to both the Henley community and the wider region. If we can get more employers to invest in it, it could get bigger — it all depends on our ability to generate income and attract sponsors.

“We will want all students to benefit, regardless of their subject, and will look for ways to integrate STEM aspects into the syllabus because there’s a growing need for digital skills in all walks of life.

“We’ve got a lot of alumni who we can approach and are also lucky to have capital reserves, which most colleges don’t have.

“We’re having discussions with two major potential supporters but they’re still undecided. It’s all very political and what we’re trying to achieve is very complex in the current climate.

“Our first step will be to consult the community as we’re aware that this is public money and it’s the sensible thing to do.

“We’re discussing the matter with the district council’s planning department and it was unanimously welcomed by the town council when we presented it to them last year.”

The college is also considering a slight increase in class sizes and reallocating staff on its BTEC subjects. It is in talks with the National Council for the Training of Journalists about launching a course incorporating elements of digital media and public relations.

This would complement its existing broadcast journalism course, which it teaches from a purpose-built television studio built three years ago which it is now linking with the film-making academy programme at Pinewood Studios.

It has also received government funding to trial a number of
T-levels, a new technical qualification that is similar to a BTEC but includes the more practical
elements of apprenticeships.

The college intends to refurbish a number of its classrooms and repurpose existing offices, including the principal’s, as social spaces and “entrepreneurial hubs” where students can discuss business ideas among themselves and with invited guests.

The planned halls of residence, similar to those at universities, for international students could be built in partnership with a national provider like Unite, which would take on the financial risk.

Mrs Deol says the college’s elite sports programmes could become much larger if the accommodation was available and with young people from overseas living in Henley, the town could become much more vibrant at night whereas currently students go home at 3.45pm.

“Henley could become like a mini-Cambridge and we would like it to be as well known for its education as it is for rowing,” she says. “We’ve got quite a bit of land and would like to partner with an organisation that, like us, aspires to be innovative and entrepreneurial.

“There’s a lot going on and we’re not saying we’ve got it all sorted because the finances are quite tight.

“I’m totally confident that the college is getting back on the right track, though we’ve had to make some hard decisions along the way.

“It was very clear from the moment I arrived that the college needs to change in order to survive and remain relevant. We have a duty to future generations as we write the next chapter of our history.

“However, we can’t do it without the help of our friends in Henley and we need all the financial support we can get.”